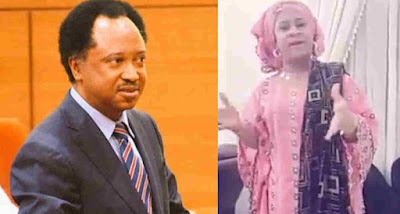 Senator Shehu Sani of Kaduna State says the lady seen in the viral video raising alarm over the purported movement of Northerners to Southeastern Nigeria is not his wife.

In the viral video, a lady wearing a pink-like gown could be seen asking why Hausas are being moved to Southeastern Nigeria despite the ongoing interstate lockdown.

She alleged in the video that those men being sent to Southeast look like Boko Haram fighters. The lady called on Donald Trump to come and help the people of Southeastern Nigeria from imminent war.

Many Nigerians who do not know the wife of Senator Shenu Sani were made to believe that the lady in the viral video is his wife.

But the Senator on Tuesday, May 26, via Twitter, said his wife has been pressuring him to make the clarification.

Senator Sani said, “The lady in a trending video in Social Media angrily critical of the movement of people from the North to the South is not my wife as reported.

“For two days, my wife has been insisting that I tweet a rejoinder, whenever I said the claim should be ignored her response is ‘Ignore What?’

The Senator quoted his wife as saying, “You know I’m not a politician. What is the meaning of listen to the message and ignore the messenger?

“It’s either you tweet and openly deny the report that she is [not] your wife, or else I will have to record and post my own video in Hausa, English, Fulfulde, and Arabic that she is not.”