Popular Links: Buhari Football EFCC Boko Haram Trending Nigerian Names Politics
Home | News | General | As a 5-year-old, this lady dreamt of being a lawyer, she has now spent 5 years at the bar (photos)
God brought me to power, nobody can remove me ahead of my time - Obaseki
Nigerian star who plays for Barcelona cries out for help from Davido, others, to return home amid coronavirus crisis

As a 5-year-old, this lady dreamt of being a lawyer, she has now spent 5 years at the bar (photos) 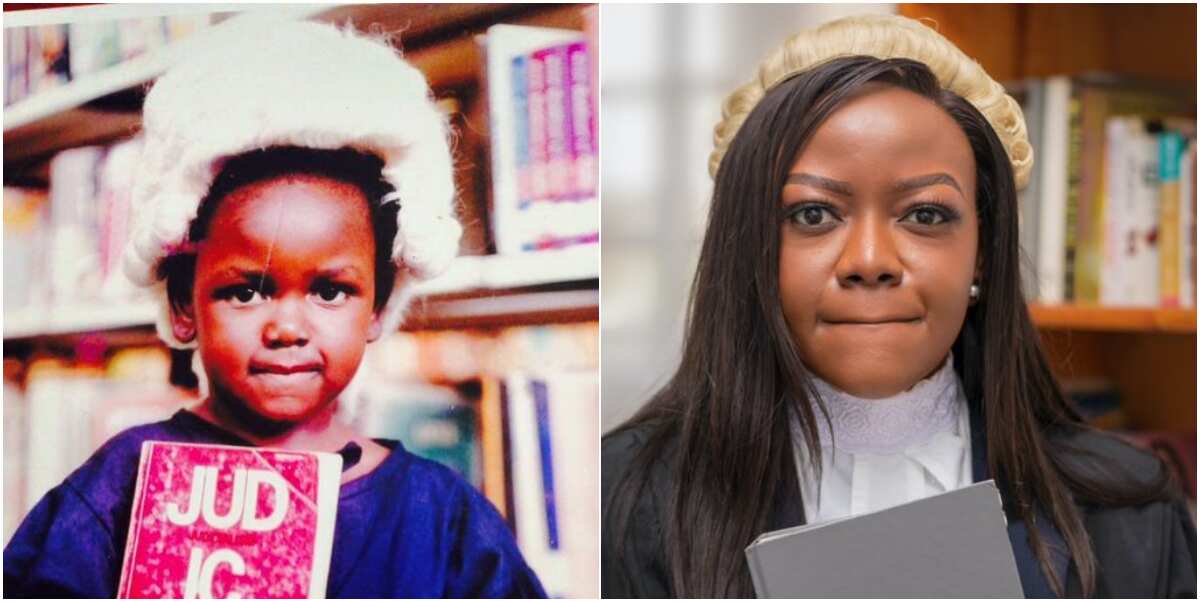 - One of the pictures was a five-year-old girl who had a dream of becoming a lawyer, while the other picture is a lawyer who has spent five years at the bar

A lady who dreamt of becoming a lawyer at the age of five has proven that dream comes true through hard work and dedication.

The lady with the handle @mz_luwi on Twitter shared two pictures of herself, one as a five-year-old girl dressed like a lawyer, and the other one as a lawyer who has spent five years at the bar.

Her followers took to the comment section to congratulate her for achieving her dream, saying she is an inspiration to others.

A Twitter user with the handle @Mbhape1 tweeted: "Congratulations on dreams come true... It's not a simple journey but hardworking and dedication makes it possible... This is an inspiration to those who are powerless..."

In other news, Ive Jones, a North Carolina graduating senior at Apex Friendship High School has a lot to be excited about after being admitted into 45 universities with over $4 million (N1,561,040,000) in scholarships.

In spite of the toll of the novel coronavirus pandemic on schools which has affected commencements everywhere, Jones is still celebrating her admirable accomplishment.

Benjamin Spencer became the very first African American to become the dean of William & Mary Law School located in Williamsburg, which is the oldest law school in the United States.

The law school was founded in the 18th century in the year 1779.

Spencer, who will also serve as the Chancellor Professor of Law at W&M, is a nationally renowned civil procedure and federal courts expert.

Currently, the African-American serves as the Justice Thurgood Marshall Distinguished Professor of Law at the University of Virginia School of Law.