- Obaseki described the move as a joke taken too far, saying the APC will pick its governorship candidate in Edo state, not Abuja

Governor Godwin Obaseki of Edo state has described as a joke the adoption of Osagie Ize-Iyamu as a ‘consensus’ governorship candidate of the All Progressives Congress (APC) in the forthcoming election.

Premium Times reports that seven governorship aspirants in the Edo state APC were said to have met on Tuesday, May 26, and adopted Ize-Iyamu as their consensus candidate.

Thereafter, Ize-Iyamu proceeded to pick his nomination forms on Wednesday, May 27, at the APC national secretariat in Abuja. 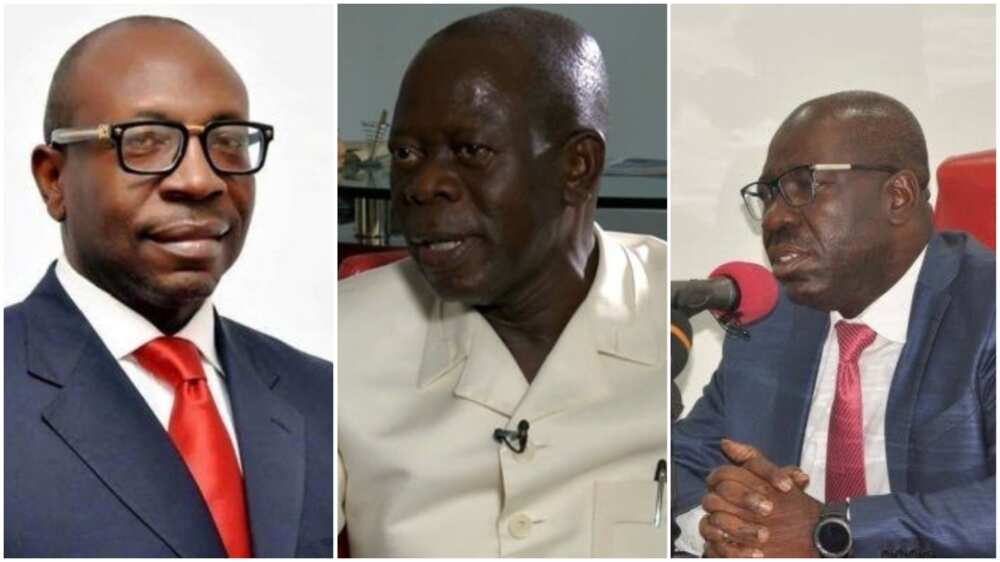 Legit.ng, however, gathers that Ize-Iyamu and others who stepped down for him belong to a faction of the APC in Edo state that is loyal to the APC national chairman, Adams Oshiomhole.

Reacting to the development, the Obaseki-led Edo state government said "the Edo state chapter of the APC, which is responsible for deploying the inner workings of the party towards the emergence of a candidate of the APC in the forthcoming gubernatorial election, resides and operates in Edo state, not Abuja."

The statement was signed by Obaseki’s spokesperson, Crusoe Osagie.

“It is, therefore, hilarious to hear that a so-called consensus candidate for the party in Edo State governorship election was selected in Abuja.

“For us, this is a joke taken too far and clearly shows that Comrade Adams Oshiomhole once again has set the APC on a journey to perdition in Edo state as he did in Zamfara, Bayelsa, Rivers, Taraba and several other states,” the Edo state governor said.

Obaseki wondered why the Oshiomhole-led APC faction picked a consensus candidate ahead of the timetable released by the National Working Committee (NWC) which fixed the primary election for Monday, June 22 in Edo state.

He said Oshiomhole is making a mockery of the APC, President Muhammadu Buhari, and the presidency

“Our conclusion on this matter is that like all other illegal actions taken by Oshiomhole, this too is a nullity and shall come to no-effect,” he said.

It should, however, be noted that the faction of the APC loyal to Oshiomhole did not say they have held the party primary as Obaseki alleged, they only said that seven other aspirants have stepped down for Ize-Iyamu and have adopted him as their “consensus” candidate for the party primary.

Earlier, Legit.ng reported that Governor Obaseki said he was not desperate about his re-election for the second term in office.

The governor said the next gubernatorial election in the state was not a priority for him now. He also noted that he was more concerned about keeping the people of the state alive especially now that COVID-19 cases are rising.

He said: "The governorship election is not a priority for now. I don't think the election should lead to bloodshed. We have always canvassed for peace in Edo state. What are the issues that cannot be resolved under democracy?

"I am more concerned about keeping my people alive especially now that COVID-19 cases are rising. You have to be alive to talk about elections and take part in politics."

In another report, the Independent National Electoral Commission (INEC) has declared that it would work towards the full introduction of electronic voting in major elections, starting from 2021.

Ohanaeze discloses why southeast candidate should succeed Buhari in 2023

The INEC said this in its new policy on conducting elections released amid the COVID-19 pandemic.

Legit.ng gathered that there have been calls for electronic voting over the years but some concerns, including the fear of cybercrime, hampered the process.

An electoral act amendment bill seeking to make e-voting compulsory in elections, however, passed second reading at the Senate in November.

The electoral umpire said in the new policy that it would not only pilot the use of e-voting machines at the earliest possible time after the forthcoming Edo and Ondo governorship elections but would also “work towards the full introduction of electronic voting in major elections starting from 2021.”

The' "European" Parliament's Committee on Foreign Affairs says it fears that the nighbouring Mozambique is becoming a hub of extremist Islamist terrorism.According to reports, the

“Oshiomhole Has Already Campaigned For Obaseki, We Will Put It Up On Billboards” – Idahosa

Chief Charles Idahosa, a former Commissioner for Information in Edo state is a chieftain of the Peoples Democratic Party (PDP). In this interview with TEMIDAYO