May 29: Five years of Buhari, a waste – Secondus 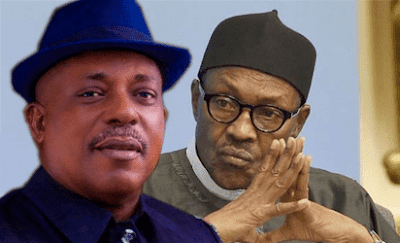 National chairman of the Peoples Democratic Party, PDP, Prince Uche Secondus has described the five years’ administration of President Muhammadu Buhari and the ruling All Progressives Congress, APC, as a waste and a road ought not to be taken.

Prince Secondus stated this in a statement made available to journalists on Friday. Titled “Five years of Buhari- The Road that should not have been followed,” the PDP boss argued that “in the last five years, all negative indexes in our socio-political and economic life as a nation were activated.”

“Today, Friday May 29, 2020, marks the fifth year of the administration of President Muhammadu Buhari and the ruling All Progressives Congress, APC.

“It has been five years of anguish for Nigerians that all negative indexes in our socio-political and economic life as a nation were activated.


“Looking back as a nation at the progress recorded in this country’s democratic journey in 2015 and where we are today, it would be difficult not have a regret.

“All gains after independence, the civil war as well as the era the Peoples Democratic Party, PDP, successfully midwifed the nation’s democratic evolution up to the point of successfully seeing an opposition win and transit into power, have been destroyed.

“This happened at a time small nations like Ghana witnessed astronomic growth in all spheres.

“In 2015, the global international community stood in salute for Nigeria for the great feat recorded in area of democracy but rather than progress from it, the nation under the watch of APC has continued to go in retrogression.

“Our general elections have been anything but fair, with security agencies and the election body abandoning their legitimate responsibilities of neutrality and fairness to being visibly partners of the ruling government,” the statement read in part.

He also gave an appraisal of critical sectors of the economy in the past five years this way:

“Nigerians after five years are still baffled at what the country has become in the area of security. Part of the propaganda that deceived Nigeria into voting in APC was that a strong man, a General was on the way to wipe out all our security challenges.

“Today, the story is better imagined, while Boko Haram is still menacing the North East region, it has given birthday to cancerous twins- herdsmen and banditry spreading and enhancing bloodletting which has become the stock of this regime.

“Nigeria remains grossly under Policed by all international standards. Decentralization of command has become absolutely necessary, meaning that state police and community Policing must be given urgent consideration.”

“The only true way to describe this segment is to simply rely on the international scorecard that already put corruption status of Nigeria as getting worse.

“This was made worse by their vindictive and selective prosecution of corrupt cases. The corruption in the system in the last five years has become so overwhelming that the anti-graft agencies have given up watching thieves they cannot catch because of who they are and where they are.

“In the last five years, the Executive made sure that the other critical arms, the Legislature, the Judiciary and the Press are not given any conducive ground to operate. Within the five years of APC administration, the National Assembly was attacked, the mace, the symbol of authority of the national parliament stolen by agents of the Executive.

“At a point under the watch of this regime, the legislators were denied access to the National Assembly by agents of the state.

“Even the sacred arm of government, the Judiciary was not left out, after the shock of the invasion and arrest of Judges and Justices at midnight by government operatives in 2016, the Head of that arm of government, the Chief Justice of Nigeria, CJN, was unilaterally removed by the President in 2019 on the eve of general election.”

Unity of the country

“Never in the history of this country since the civil war has Nigerians been as divided as they are today. This administration by their style consciously activated all the indicators that divide us, tribalism, religious bigotry and nepotism among others. This they did easily by running a bias government with their 97 per cent and 5 per cent sharing formula of positions and resources.”

“In five years of APC, one very glaring area it has shown clear incapacity is in the management of the economy. Under their watch, the country had gone into recession and out and by their own admittance we are walking back into it.

“But the truth which they are holding back is that we are already in recession and even going into depression going by all the economic manifestations. What they are now doing is mortgaging the future of the country with their incessant loan acquisitions. National Assembly should therefore halt further loan approvals and demand thorough accounting of previous ones.”

Where do we go from here?

“As an opposition party who laid the foundation for a solid democratic Nigeria in this dispensation, we are at pains at the level of destructions of various sectors. We will continue to proffer constructive views to issues even though the drumming is not getting to any ear.

“Our advisory to this government after five years and looking forward, is to align Nigeria to the global community. Observe and follow all rules of democracy, rule of law and respect for human rights.

The way to go is to off load government to those who can and are better equipped to manage it.

“The meaningful thing to do is to hand over critical sectors of the economy to the private sectors who are more equipped to manage it. This undoubtedly will reduce corruption and enhance efficiency.

“This government must face reality that this federal government as presently structured cannot move forward, its size and waste must be addressed pragmatically. Those opposed to restructuring by viewing it from the political point of view are missing the point and soon chicken will be home to roost if it has not come already.

“A Post COVID-19 Nigeria must face reality if it must survive and confront the emerging challenges of low revenue and rising unemployment with its accompanying vices.

“The glaring incompetence exhibited in governance in the last five years makes it imperative that the regime must look outside the box to survive. Unfortunately, this government does not possess the wherewithal to face the impending economic crisis.”