- The president of the United States, Donald Trump, has shared a funny funeral meme of the Ghanaian pallbearers online

- In an interview, the leader of the pallbearing group stated that he saw Trump's Facebook post as the "ultimate endorsement" of his work

Ghanaian Benjamin Aidoo, the leader of the troupe of dancing pallbearers who have become a global sensation because of a viral meme, is happy that US President Donald Trump has shared footage of the dancers.

According to the BBC, Trump re-posted a video that had been doctored to show the pallbearers dancing with a coffin that had the words "Biden president" written on the side on Facebook.

Benjamin indicates that he feels the entire world will now see their work and that could open many doors for him and the team.

Three years later and the group has experienced a second round of internet fame, with social media users adopting the troupe as a dark-humoured symbol of death in these COVID-19 times.

Meanwhile, Legit.ng earlier reported that a doll-making workshop that is based in Hong Kong, China, called JMG 1/64 Miniatures, started producing figurines of the popular Ghanaian funeral pallbearers for sale as they have gone viral. 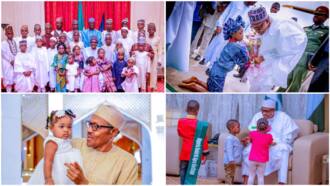 In a post sighted by Legit.ng on the Facebook page of the company, it was clearly indicated that many customers have been patronizing the product and the firm promises to release more interesting dolls in the future.

Candance Phaire, her mom, said that her daughter has always begged them at home to start a charity since she was seven years old.

Explained: 6 Reasons Why Donald Trump Might Be Impeached | Legit TV