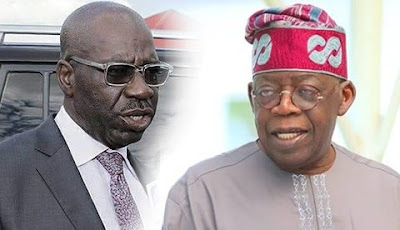 Eight governors elected on the platform of the All Progressives Congress, on Sunday, held a meeting with the National Leader of the APC, Asiwaju Ahmed Tinubu, at the state House Marina, Lagos to make a case for the Edo State Governor, Godwin Obaseki.

Although details of the meeting were still sketchy as of the time of filing this report, it was gathered that the governors were at the closed-door meeting to seek Tinubu’s intervention in the search for truce in the political conflict between Obaseki and his godfather, the National Chairman of the APC, Adams Oshiomhole.

Others are Mohammed Abubakar (Jigawa) and Obaseki.


Five of the governors, including Obaseki, then proceeded to Abuja, preparatory to a meeting with President Muhammadu Buhari.

A source privy to the meeting who pleaded anonymity because he was not authorized to speak to the media, said, “The governors met with our national leader, they laid their cards on the table and plainly asked for his intervention.

“They admitted that mistakes had been made especially with the governor’s refusal to pave the way for the swearing in of 14 elected APC members as members of the state Assembly.

“They also noted that the meeting ought to have held earlier and that the governor who was present at the meeting should have reached out to seek help much earlier before the situation degenerated to the level of a public spat between the governor and the national chairman.

“And being the kind of person, he is, our leader listened patiently and he is not one to rush into judgment before hearing from the other party. He will look at what is in the party’s best interest after consulting widely with other stakeholders before taking a final stand.”

The National Working Committee of the party had approved the direct primary as the mode of selecting the party’s standard bearer for the forthcoming governorship election in the state.

Loyalists of the governor are opposed to the mode arguing that it was meant to frustrate his chances of standing as the party’s standard bearer.

Obaseki and his estranged political godfather have been at odds over the former’s bid for a second term in office following a long-drawn battle for the political control of the state.

Pundits accuse the governor of working with his fellow governors opposed to Oshiomhole leadership style in an earlier attempt to force Oshiomhole out of office.

A member of the party’s National Working Committee who also pleaded anonymity for fear of retribution said, “Besides the feud between Obaseki and our National Chairman, we have to consider the overall interest of our party. The best thing to do for our party in Edo is to have direct primaries. This is why; it is the best for us even without the conflict between the two leaders. The last time we did primaries even for the election of Obaseki as governor, it was direct, we have done that there before, we can only improve on it than to go and try something new. Two, if we are learning from our past mishaps like what happened in Rivers State, there were litigations over the congresses we did before and we went into indirect and we used officials whose positions were being challenged in court as delegates and when the court nullified the congresses that brought the executives, everything done was nullified, we lost the opportunity to contest the elections in Rivers State.

“There are two chairmen in Edo, we have recognized the removal of the Anselem-led exco and the matter is still in court, whichever way the court rules, we may have a problem if we use the indirect using the executives as delegates.

“Then there is the issue of COVID-19 with the protocol of social distancing. It will be easier to manage a crowd in each ward instead of bringing four to five thousand people in one place as the indirect mode will require.”

When contacted, the APC National Vice-Chairman, South South, Hilliard Eta said, “As the governing political party, the APC will continue to lead by example when it comes to giving party members the right to choose candidates.

Also, the National Publicity Secretary of the party, Mallam Lanre Issa-Onilu, said, “The APC will, as always, provide a level playing field for all aspirants to pursue their legitimate aspirations in line with the constitution on our party guidelines.”