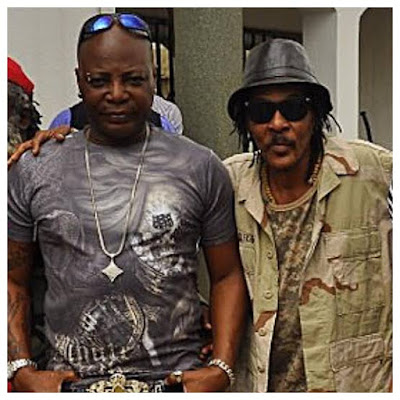 Fans of the late Nigerian music legend, Majek Fashek, have been keeping his memories alive with fond tributes.

Majek died in New York, on Tuesday.He was 57.

Nigerian entertainer, Charles Oputa aka Charly Boy, has joined the swell of tributes flowing in for his late colleague.

Charly Boy narrated how he met and worked with Majek for the first time over three decades ago.

“My father came from Lagos to Oguta, my home town, along with Majek Fashek, and he spent one year with me. In fact, he (Majek) sketched his hit song ‘Send down the Rain’ in my small studio back then in the village. This was where I also learnt a lot from him about music.


“Majek was both handsome and talented as a music artiste, and he was a lyrical wizard because his lyrics were so powerful and revolutionary. There were other talented musicians during his era, but the message in his songs is so on point and that is why I admired him so much,” he said.

The former PMAN president said  although Fashek is no more, his songs will remain timeless because of the inspiration behind the lyrics. He however prayed that God would grant the family of the departed artiste the strength to forge ahead, as death is an inevitable debt every mortal must pay.

Paying his own tribute, veteran reggae singer, Orits Wiliki, described Majek Fashek as a mentor and one of the pillars of reggae music in Africa.

“You call him a mentor, a foundation member, and one of the pioneering reggae artistes in Africa. Majek would be remembered for the messages that he preached through his songs while on earth.

“One of the best tributes we can pay to Majek Fashek is to do everything we can to ensure the rebound of the Industry, to which he gave so much, from its present state, occasioned by the effects of the pandemic,” he said.

The' "European" Parliament's Committee on Foreign Affairs says it fears that the nighbouring Mozambique is becoming a hub of extremist Islamist terrorism.According to reports, the

Kindly Share This Story: Slovenians infected with the novel coronavirus or undergoing quarantine will soon be obliged to use a mobile phone contact tracing app, after