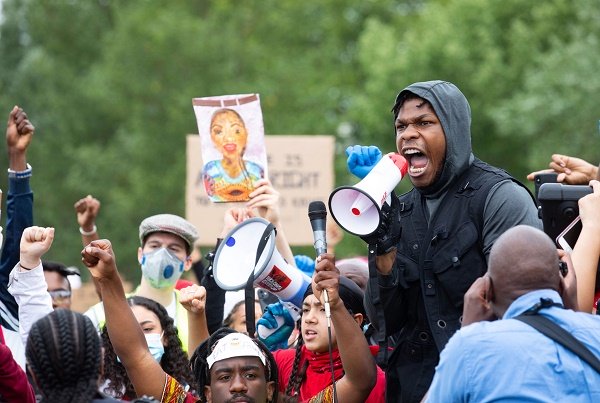 John Boyega, Nigerian-British actor, was among several demonstrators who thronged the streets of London to protest the recent killing of George Floyd, a black American.

The ‘Star Wars’ actor, holding a loudspeaker, spoke passionately to a crowd at Hyde Park on Wednesday afternoon before they marched towards residence of Boris Johnson, prime minister of UK.

In the emotional speech, Boyega appreciated those who came out for the protest, noting that it is about time people protested injustice against blacks.

“Black lives have always mattered. We have always been important,” he said in the emotional speech recorded by Haley Ott, CBS News’ reporter.

“Black lives have always mattered. We have always been important. We have always meant something. We have always succeeded regardless. And now is the time. I ain’t waiting,” @johnboyega just told #BlackLivesMatter protesters in London’s Hyde Park pic.twitter.com/P49cbwIp6P
— Haley Ott (@haleyjoelleott) June 3, 2020

Most of the protesters wore masks or gloves and also chanted “black lives matter” and “we will not be silent”.

“Thank you for coming out today, thank you for being here to show your support,” Boyega added.

The PM had described the death of Floyd as “inexcusable”, adding: “I think what happened in the United States was appalling, it was inexcusable, we all saw it on our screens and I perfectly understand people’s right to protest what took place.”

The demonstration further stretches the global outrage that has continued to trail the killing of Floyd.
Several celebrities and media firms also joined the BlackOut Tuesday to also protest his death.

Floyd died in Minneapolis on May 25, after an arrest by a police officer, who pinned him to the ground for several minutes by kneeling on on his neck.