- Godswill Akpabio, a minister under the current government, has been fingered in failed N500m worth NDDC contracts

As the Niger Delta Development Commission (NDDC) faces the most turbulent period of its existence, more revelations about corruption perpetrated through the commission are beginning to manifest.

Recently, Peter Nwaoboshi, the chairman of the Senate committee on Niger Delta, raised an accused finger on the minister of Niger Delta Affairs, Godswill Akpabio.

Nwaoboshi said Akpabio failed to execute the contracts he got from the commission worth N500million, The Nation reports.

The fresh accusation came amid a series of ongoing altercations between the Senate and NDDC following president Muhammadu Buhari's order mandating the forensic audit of the commission.

Trouble for looters as ICPC commences investigation into distribution of Covid-19 funds, palliatives

Legit.ng notes that NDDC and projects conducted under the commission are being supervised by the Niger Delta affairs ministry which Akpabio, a former governor, supervises. 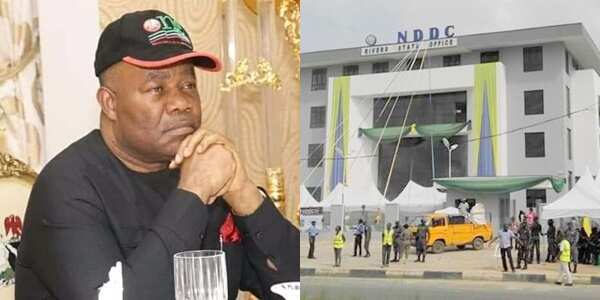 Godswill Akpabio, a minister under the current government, has been fingered in failed N500m worth NDDC contracts.
Source: Depositphotos

Akpabio has, however, dusted off the allegations against him, saying they are febrile imagination of people who want to drag his ministry into disrepute amid ongoing confrontation.

It would be recalled that Senate and the House of Representatives had launched a joint probe of “reckless” N40billion by the NDDC.

The outcome of the investigation indicted Akpabio who Nwaoboshi accused of getting contracts in 2017 which he failed to execute when he was the minority leader of the Senate.

He said the minister requested that five projects worth N500million be added for him in the NDDC’s budget.

Earlier, Legit.ng reported that following an allegation of N40 billion fraud against the Interim Management Committee (IMC) of the NDDC, the National Assembly on Tuesday, May 5, passed a resolution to investigate the claim.

This is coming after Senator Thompson Sekibo, the chairman of the Senate committee on Navy, debated the motion which he sponsored on how the IMC spent N40 billion within three months.