Nigerian Abiola makes it, becomes officer in US Navy after much struggle, shares graduation photos

- Abiola Bamgbose, a Nigerian man, has represented Nigeria well as he became an officer in the American Navy

Another Nigerian, Abiola Bamgbose, has made the nation proud as he became a junior officer (ensign) in the United States Navy.

In a LinkedIn post, Abiola said that he had to endure 13 weeks of pain and a fracture on his right tibia before he made the Officer Candidate School (OCS) graduation.

According to his public profile on the platform, he had his first degree in electrical and electronic engineering from the Obafemi Awolowo University before he proceeded to the University of Denver for his masters in computer and information systems security/information assurance in 2017.

He joined the force as an electrical engineer in April 2013 and became the precision physical and dimensional measurement calibrator in 2018. 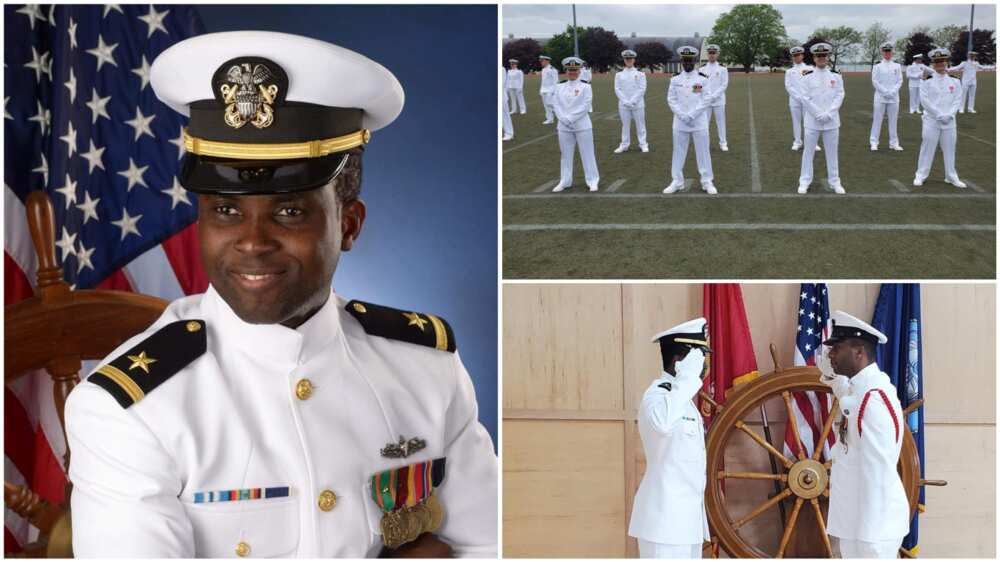 Some of his professional certifications are general radiotelephone operator license, and physical measurement and dimensional calibration.

Meanwhile, Legit.ng earlier reported about Omobolaji Adetunmbi who joined the enviable pool of Nigerians who are flying the flag of the nation high. A picture she shared on Twitter on Thursday, May 14, showed she is in the US Army.

Since she posted her pictures in the force's uniform, the photos have gone viral gathering over 40,000 likes with thousands of retweets. According to her, she works harder because she knows the people she represents.

In other news, three Nigerians are leading two other writers from African countries as they were shortlisted for the 2020 Caine Prize for African Writing.

Irenosen’s story is titled Grace Jones, while Jowhor’s and Chikodili’s pieces are Fisherman’s Stew and What to do When Your Child Brings Home a Mami Wata respectively.

Other shortlisted candidates for the prize are Erica Sugo Anyadike from Tanzania with short story How to Marry An African President and Remy Ngamije from Rwanda with The Neighbourhood Watch.

Kennet Olumiya Tharp, the chair of the judges, said that the submitted stories are diverse and they “collectively did much to challenge the notion of the African and diaspora experience and its portrayal in fiction…”.

James Murua, Gabriel Gbadamosi, Audrey Brown, and Ebisse Wakjira-Rouw are other judges who will be looking at the submitted stories objectively.