- Real Madrid will need to beat Mallorca to go back top of the table on Wednesday, June 24

Barcelona vs Athletic Bilbao ended in favour of La Blaugrana as the only goal of the match was scored in the second half.

Ivan Rakitic came in as a substitute to score the match-winner with just 20 minutes left to play in the match.

The match produced some fireworks from the blast of the whistle as Bilbao were the purposeful side in the opening exchanges.

The best chance of the half fell to Inaki Williams as he latched on to a through ball but hit the side-netting with his finish.

The away side were defensively organized in the first half as Barcelona could not force a save from their goalkeeper in the first 45 minutes.

However, Barca started stronger in the second period and created numerous chances as Bilbao's keeper Unai Simon was kept busy. 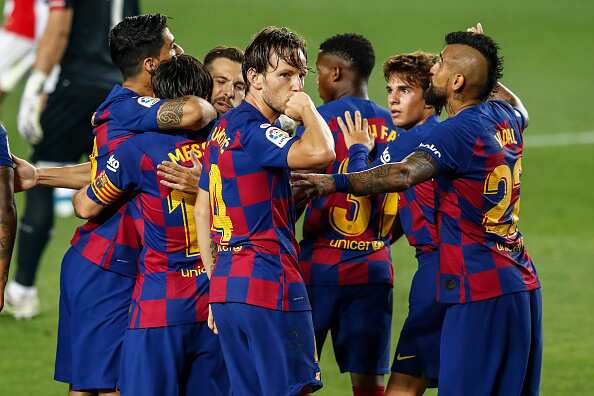 And it took Rakitic who came in for Sergio Busquets, to anticipate a pass from Lionel Messi after Bilbao could not properly clear the lines.

The Croatian midfielder timed his run to perfection from a Messi's pass as he tucked home his team's first goal in the 70th minute.

Messi who was still in search of his 700th career goal almost made it 2-0 but he was so unlucky after he created space for himself in the box as his shot went just wide.

Athletic Club put some urgency in their attack but their crosses into Barca's 18-yard box were properly dealt.

Simon made a fantastic save from an Arturo Vidal first-time volley and the follow up from Ansu Fati hit the post in the closing stages of the match.

The match ended in a 1-0 win in favour of the defending champions as they go temporarily on top of La Liga table with Real Madrid having a game at hand against Mallorca.

Meanwhile, Legit.ng had earlier reported that Lionel Messi was caught on camera in training with a scar on his leg following a nasty challenge from Sevilla star Diego Carlos.

The incident led to scuffles between both sides as Messi pushed Carlos on the chest who frantically went down.

The Brazilian defender was lucky not to have been shown a red card for his tackle while Messi also escaped being booked.

Luck smiles on young boy who went viral for dancing in the rain as he gets full scholarship (video, photo)

- Fade Ogunro, a Nigerian woman, has given a full scholarship to a young boy whose dancing got everyone talking online- The Nigerian said that