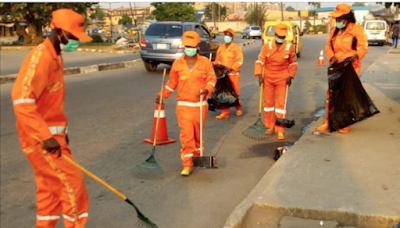 Ibrahim Odumboni, acting managing director of the Lagos State Waste Management Authority (LAWMA), has alleged that some contractors were involved in sharp practices.

According to the Nigerian Tribune, Odumboni said the government approved N25,000 for each sweeper in the state, but the contractors shortchanged them and paid as low as N5,000.

He said an audit embarked upon by the state showed that some of the contractors padded their bills with ghost sweepers and supervisors.

“Our operation is such that we delineate the twenty councils and thirty-seven development areas in Lagos into routes. These routes are, in turn, contracted out to mangers or contractors if you like. They are the ones who hire the sweepers and the supervisors directly,” he said.


“Our own role is to pay them and carry out oversight to ensure services we pay for are rendered. In this particular instance, what happened was that reports reaching us indicated that the contractors were not meeting their obligations to those they hired.

“Aside that, at our end, we discovered that the bills being submitted by the contractors were shooting up as the months rolled by. I think Mr Governor was not happy with the situation. I was asked to take over in May. By the time I took over, only two months were being owed the contractors contrary to the stories being peddled around that the government was owing six months or so.

“Of course, the audit carried out revealed a lot of things. We found out that a good number of the contractors were involved in sharp practices by padding up their bills with ghost sweepers and supervisors. Worse still, they were underpaying them. Some contractors were paying the hardworking sweepers N5,000, N12,000, N15,000, N18,500 monthly whilst the state approves N25,000 for each sweeper and N40,000 for supervisor. That has vindicated Mr Governor.”

Odubomi said Babajide Sanwo-Olu, the governor of the state, has been vindicated.

He said the state would work on putting an end to the situation and ensure that scarce resources are put to use.

Street sweepers in the state have carried out demonstrations to protest owed salaries.