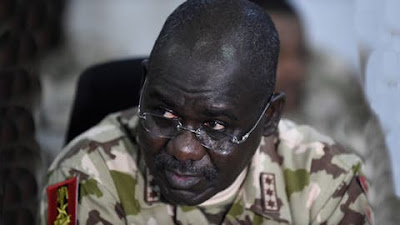 Addressing Zamfara journalists in Faskari town of Katsina State very close to Zamfara State on Wednesday, Buratai said, the Army would squarely face and kill the notorious bandits if they failed to surrender but ruled out the possibility of negotiating with them.

“We will make sure that we fight against banditry and other forms of criminal activities in all parts of the country but no reconciliation, as such I am calling on the bandits and other criminals to surrender and embrace peace.”

Buratai also debunked claims that the Army has failed in the fight against insurgency, explaining that the Army is doing its best.


He maintained that a substantial number of both Boko Haram members and the bandits were neutralized by the Army within the last few months, adding that, “Very soon, we will get rid of all forms of criminalities in the country”.

Buratai commended the military for their untiring efforts in the fight against insurgency, calling on the people in the country to support them in order to achieve the desired objective.