- Manchester City vs Liverpool ended embarrassingly for the champions

- De Bruyne, Sterling, and Foden all got on the score-sheet

It was an extraordinary night at the Etihad as English Premier League champions Liverpool were wallopped 4-0 by second placed Manchester City on Thurday, July 2.

Kevin de Bruyne opened the scoring from the penalty spot in the 25th minute after Joseph Gomez fouled Raheem Sterling in the box to open the flood-gates of goals.

Sterling himself grabbed the second goal ten minutes later to make it 2-0 leaving Jurgen Klopp and his ward hapless; and it was 3-0 on the stroke of half-time.

Liverpool returned from the tunnel hoping to claim respect as they battled to reduce the scoreline, however it was an own goal by Alex Oxlade-Chamberlain in the 66th minute that further embarrassed the champions as it ended 4-0. 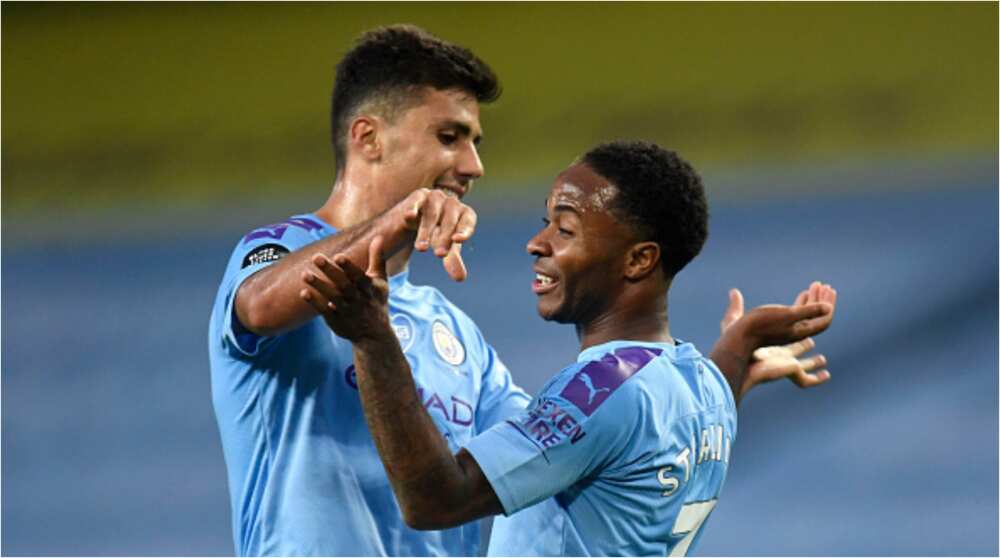 It was a resounding victory for Pep Guardiola's men over champions Liverpool who have an unassailable lead of 20points at the top of the standings.

With the result, Manchester City complement on their second-placed position with 66points from 32 matches.

Liverpool however remain on 86 points, however the champions are expected to lift the 2019/2020 trophy when they play at home to Aston Villa on Sunday, July 5.

Earlier, Arsenal vs Norwich City ended in a 4-0 win for the Gunners as they continue their remarkable comeback on the backdrop of defeats since returning from the break.

Pierre-Emerick Aubameyang scored a brace from two mistakes and Granit Xhaka added the third while Cedric Soares completed the onslaught to push Arsenal up to seventh on the table.

The match ended 4-0 as the north London club are still in strong contention to play in Europe next season.

Legit.ng earlier reported that Leicester City manager Brendan Rodgers has defended Nigerian midfielder Wilfred Ndidi for the penalty he caused his side which gave Everton a 2-1 win over the Foxes in Premier League tie.

Everton on Wednesday night, July 1, maintained their home record against Leicester City after recording a controversial 2-1 win in an encounter played behind closed doors.

Richarlison scored the first goal for the hosts in the 10th minute after receiving a superb assist from Anthony Gordon in which Kasper Schmeichel was beaten.

And after six minutes Gordon netted the opener, Wilfred Ndidi was adjudged to have handled the ball in the box in which the referee gave Everton a penalty.