- A banana hawker, Nkechi Ezenwa, had triplets after she was molested

- After giving birth to the children, Ezenwa is seeking help on paying her medical bills

- During the delivery process, she reportedly used six different cylinders

A man with the Facebook name Chidiebube Okeoma has called for help for a 20-year-old banana hawker, Nkechi Ezenwa, who gave birth to triplet after she was raped.

The new mother said she started having pangs of labour on Sunday, June 14, and after giving birth to one, she was told there were still more children in her womb.

Due to their lack of equipment, she was directed to another hospital that started rendering medical services after a deposit was made by a church member, Ugochi Uba who took her to the hospital.

After the whole delivery process, she was slammed with a bill of about N422,000, an amount she has called on Nigerians to help her settle.

"I have spent 6 cylinders of oxygen on the babies to make sure they are alive, Nkechi needs more blood to replace the blood she lost during the cesarean section.

"I bought a brand new power generator because of these babies where I spend up to 6000 naira daily to make sure the babies are kept warm inside because of the fear of Covid19,” an unnamed doctor at the hospital reportedly said. 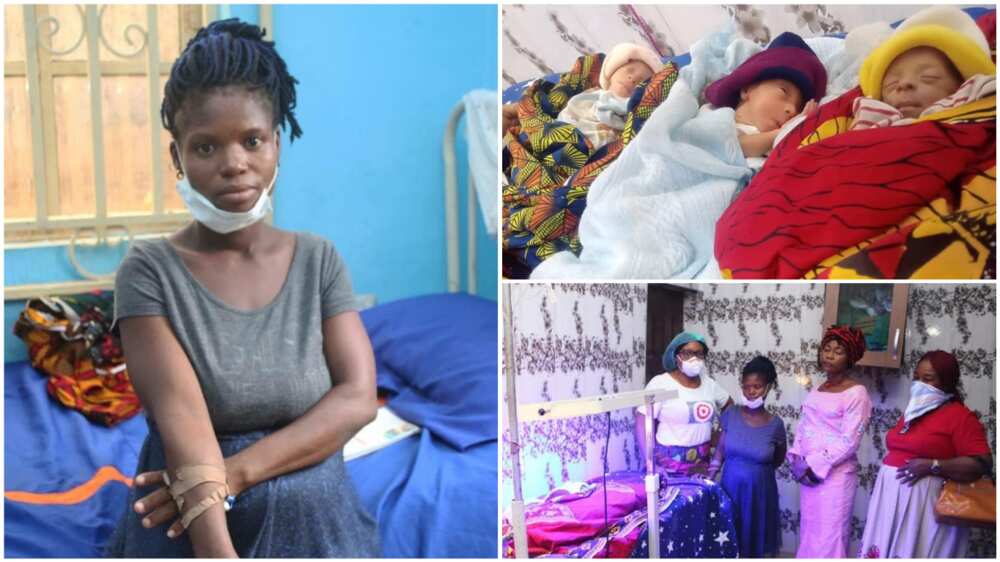 Meanwhile, Legit.ng earlier reported that to survive the economic hardship that the ongoing lockdown is causing, a woman named Peninah Bahti Kitsao living in Mombasa, Kenya, has been cooking stones for her children.

Before the coronavirus lockdown, the woman worked as a local laundrywoman. Now that restriction is in play, her customer base has drastically dwindled.

Peninah said that she always hoped they would fall asleep as they wait on end for the meal (stones) to get done.

Her neighbour, Prisca Momanyi, who was taken aback by the whole act, informed the media about the woman’s plight.

The woman has since received help as many donated money to her bank account that was opened for her by Momanyi.

The widow said she could not believe people would come to her rescue the way they did, calling everything a big miracle.

In speaking with the media, she said that she had to resort to that tactic because she had nothing. The widow, however, said that the children later knew that they were being lied to.

"They started telling me that they knew I was lying to them, but I could do nothing because I had nothing,” she said.

We are tired! Nigerian women protest against rape| Legit TV