Everything in this hotel is plated in gold! See how much a room goes for

The world’s first self-proclaimed gold-plated hotel called Dolce Hanoi Golden Lake Hotel is reportedly open for business in Vietnam. With this edifice, the face of international tourism is about to change.

How Africa reports that the hotel is plated in 24-carat gold in its lobbies. It also features an infinity pool and rooms with all cutleries, toilet seats, showerheads in gold.

It has 400 rooms and will be operated under the American Wyndham Hotels brand. A room at the room goes $250 (N96,875.00) per night and apartments are available for rent there. Gold for the hotel was locally sourced to reduce building costs.

“We want the ordinary people to the super rich… to check-in. Our group has a factory that can do gold-plated stuff, so the cost for our equipment and furniture here is quite cheap,” Nguyen Huu Duong, the owner of the hotel, said. 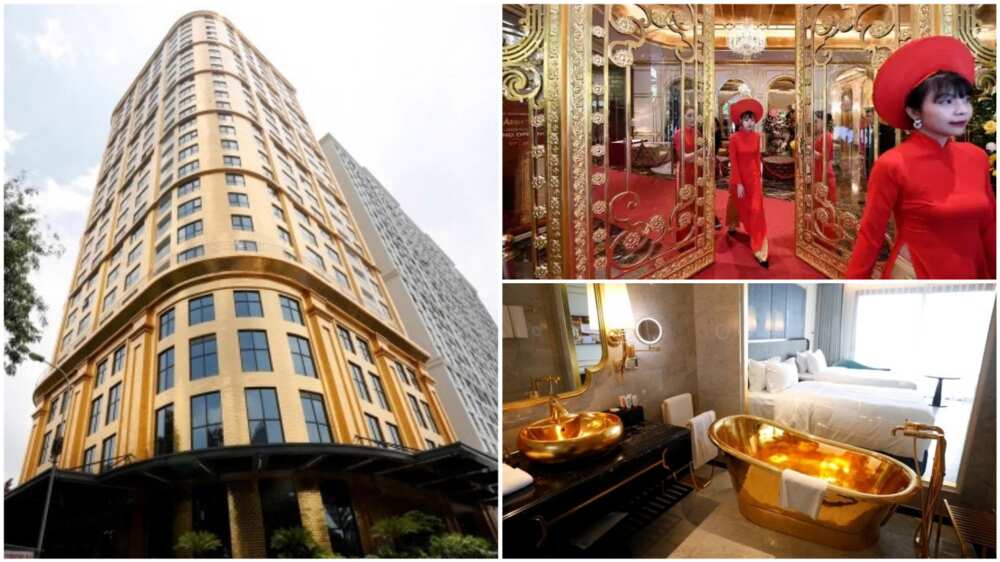 A collage of the hotel. Photo source: HowAfrica
Source: UGC

Meanwhile, Legit.ng earlier reported that the Sultan of Brunei, Hassanal Bolkiah, is one of the richest religious monarchs in the world. He was once worth $40 billion (N15,500,000,000,000).

It should be noted that he succeeded his father, Sultan Omar Ali Saifuddien, who had 10 children from several wives.

Bolkiah's father abdicated the throne in 1967 and made him the king while he was at UK’s Royal Military Academy in Sandhurst.

A year after, Bolkiah ascended the throne when he got done with the academy. The man was also known as a playboy as he had so many extra-marital affairs.

The big palace covers a wide area of 2.2 million square feet. Its designer was the popular Architect Leandro Locsin.

It made World Guinness Records as the largest residential palace. Another thing worthy of note was that the Sultan’s family reportedly bought half of the world’s Rolls-Royce as Bokiah held a record for having the largest collection.