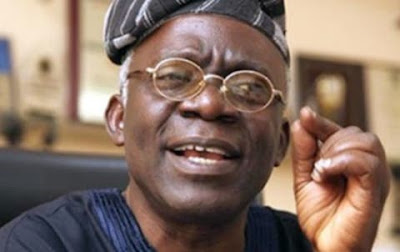 A communiqué issued in Abuja on Wednesday had stated that the political group was formed by 30 prominent Nigerian activists, professionals and academics, with the aim of mobilising Nigerians ahead of the 2023 general elections.

Falana, whose name was mentioned as part of the 30 members, said in a statement on Friday that neither was he ever consulted on the formation of the group nor did he ever attend the meeting where the forum was launched.

However, commending the motivation behind the formation, Falana said he was in support of “all efforts aimed at creating an alternative platform with the potential of lifting the long-suffering people of Nigeria from economic and political stupor”.


He added, “I also recognise the fact that some of the promoters of the NCF are people who are motivated by the common good. Many of them have made profound sacrifices to make Nigeria a better place to live.

“In this light I commend what appears to be the genuine motive of the organisers of the National Consultative Forum.

“However, I observe that my name has been mentioned as one of the pillars behind this initiative. While I appreciate the concern of the leadership of the new group to enlist my support, I wish to say that at no time have I been consulted neither did I attend the meeting where the forum was launched.

“I appreciate the almost desperate situation progressive Nigerians find themselves in the bid to save Nigeria from what looks like an imminent shipwreck. This might  have informed the haste with which many honest and dedicated hands find themselves.”

“I wish to add that there are several efforts I have been involved lately and I believe there is a growing perspective that all efforts should be harmonised for maximum impact,” he added.

A former President of the Nigerian Bar Association, Mr Olisa Agbakoba, whose name was also mentioned among the promoters of the group, had earlier on Thursday distanced himself from it.

Agbakoba and Falana were listed as a member alongside a former Speaker of the House of Representatives, Ghali Na’abba; a former Deputy Governor of the Central Bank, Dr Obadiah Mailafia, Col. Abubakar Umar (retd.), Mrs Obigeli Ezekwesili and others.