- Instead of making him pay up for the damages, Eris gave him N50,000 to fix his broken car

Rather than arrest and maybe prosecute a taxi driver who rammed into his fence, a kind-hearted Nigerian man from Bayelsa state, Paul Eris, displayed the humane part of him.

The cabman witnessed the kindness Eris after his car lost control and rammed into the fence of his house and also the electric pole meant to supply electricity to his building. 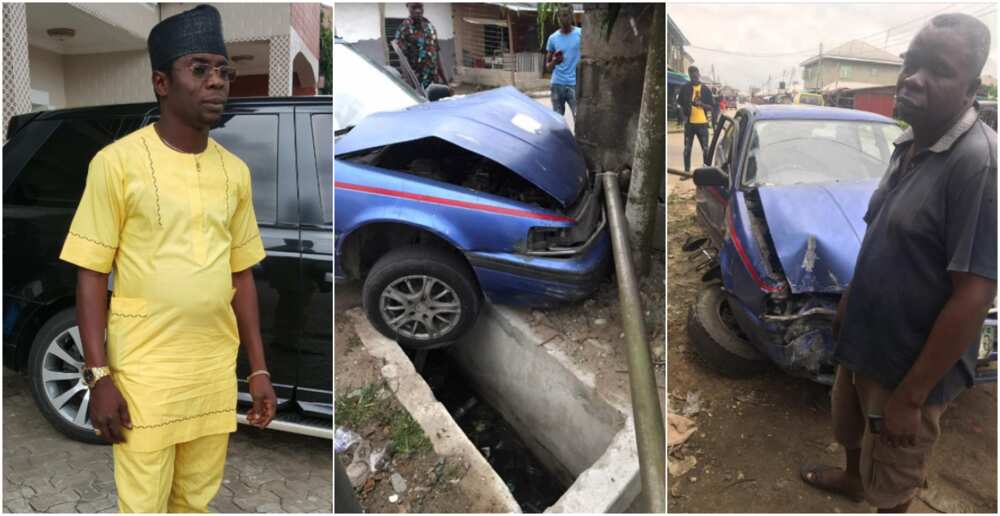 The kind man who was a former Niger Delta agitator fence was damaged but he decided to have mercy on the taxi driver by letting him go without fixing the damaged part of his house. He also gave him the sum of N50,000 to fix his damaged car and get back to work.

The man who was once a driver felt sympathy for the cabman as he noted that he couldn't have rammed into his fence or broke the pole supplying electricity to his house on purpose.

"My transformer fence was hit and electric pole brought down this morning, I don’t know where the taxi driver was rushing to, but my Joy is that the driver is strong and alive, I will never give a struggling man the satisfaction of wishing him to suffer for an act that can happen to everyone.

I was a driver with Binta High Schools (Wale Adenuga) in Lagos some years back, and I later ended up driving bus (Danfo), and I realized there are no mistakes in life, except beautiful accidents.

And if I was mistreated for one or two cases doesn’t mean I should manhandle another who is a victim of circumstance, I won’t do that."

In other news, Legit.ng reported that a man identified as Kimberly Ezeike shared a personal story of how he helped a woman recover her money from where she lost it.

Lamenting on how careless some people can be especially at this time of hunger and poverty caused by the lockdown in the country, Ezeike said that he was driving home when a bike man passed him.

He said he later saw a nylon bag with a small opening fall from the bike. The kind-hearted man stated that when he stopped to check the content of the bag, he saw some money and it was to the tune of N100k.

Also, a media personality identified as @certifiedcamill took to Twitter to share the story of an honest Nigerian man called Chidiebere Ogbonna.

He described the man as his personality of the week as the kind-hearted man bought a carton of noodles, and when he realised that a huge sum of money was in the carton, he returned the noodle box quickly to where he bought it from.

Kindly Share This Story: By Shina Abubakar, Osogbo The heavens opened its valves and showers of blessings rained on the Osun maiden voyage and its devotees as