- According to them, a lot of people who share proximity with pig farms are at greater risk of contracting the virus

Scientists have alerted the public of a new flu virus resident in Chinese pigs, saying it has become even more infectious and dangerous to humans and needs to be closely monitored so it does not become another pandemic.

Reuters, however, reports that the study by the scientists said the virus threat is not imminent. The discovery was made when a team of researchers assessed influenza viruses found in pigs from 2011 to 2018.

They found a G4 strain of H1N1 which has all the features of being a pandemic. The paper of the study was published by the US Journal, Proceedings of the National Academy of Sciences (PNAS).

It was also discovered that people who work on pig farms have a high amount of the virus in their bloodstreams, adding that it is important to monitor workers in the swine industry. 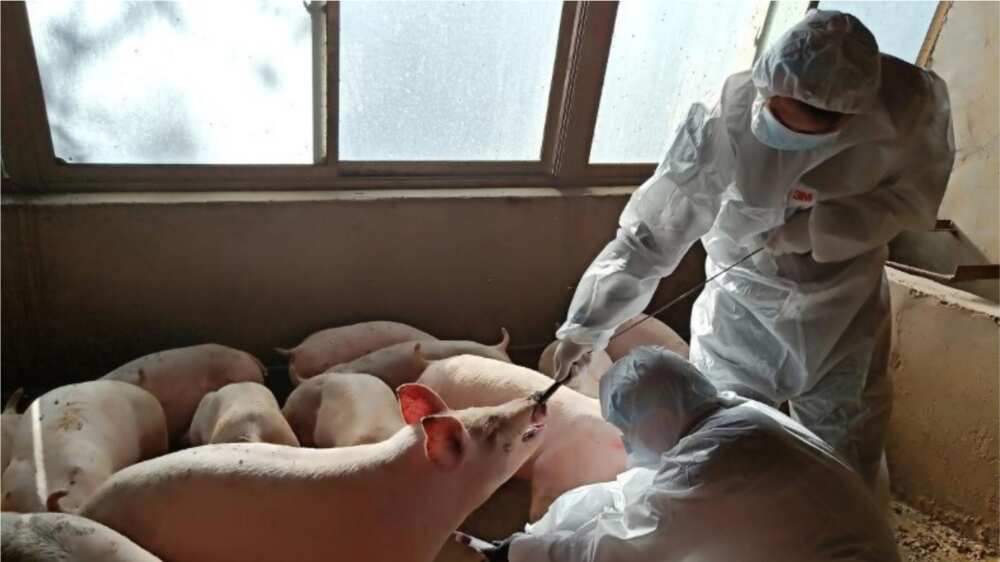 There was also the fear associated with the risk of the virus affecting Chinese regions where many live closely with farms, slaughterhouses, and wet markets.

It should be noted that in 2009, China restricted international flights so that the outbreak of avian H1N1 does not affect other countries.

Meanwhile, Legit.ng earlier reported that just minutes before dying, a 26-year-old coronavirus patient documented his last moments in a selfie video he sent to his father on Friday night, June 26.

If you have fever, it’s more likely due to malaria than COVID-19 - PTF coordinator says, begs private hospitals not to reject patients of other diseases

The video showed him saying that he could not breathe as the ventilator was taken off him by doctors. By Sunday, June 28, the video had become a massive sensation online.

In the clip, the man also accused health officials of earlier ignoring his call for oxygen for three hours. The deceased’s dad did the final rites for his son on Saturday, June 27.

“They have removed ventilator… My heart has stopped and only lungs are working, but I am unable to breathe, daddy. Bye daddy, bye all, bye daddy,” he said.

The hospital, however, dismissed the allegation the deceased made, saying that he was at a very medically bad state that he could not sense the supply of oxygen being given to him.

Hantavirus vs Coronavirus: 5 quick facts you should know | Legit TV