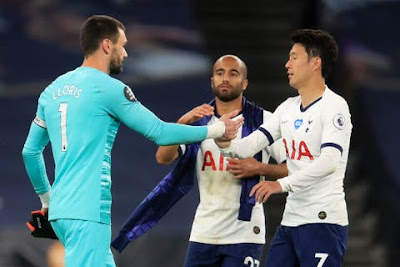 Tottenham forward Son Heung-min was involved in a furious row with team-mate Hugo Lloris at half-time in their side’s 1-0 win against Everton on Monday.

As Son walked towards the players’ tunnel at the Tottenham Hotspur Stadium, France goalkeeper Lloris confronted the South Korea star, shouting at him and shoving his shoulder.

The usually placid Son responded angrily and the pair had to be kept apart by team-mates Harry Winks and Moussa Sissoko as the altercation threatened to boil over.

It seemed Tottenham captain Lloris was irked by Son’s failure to close down a loose ball in midfield moments before Everton threatened through Richarlison.


Neither of the feuding players was hauled off at the break as Tottenham manager Jose Mourinho tried to keep the peace.

Son and Lloris looked to have buried the hatchet when they hugged at the final whistle after Tottenham secured their second win since the coronavirus hiatus.

Mourinho’s men sealed the points thanks to a first half own goal from Everton defender Michael Keane, who deflected in Giovani Lo Celso’s shot.

Tottenham’s second win in their last 10 games in all competitions lifted them into eighth place in the Premier League one point behind north London rivals Arsenal in seventh.

Just a year after reaching the Champions League final under previous boss Mauricio Pochettino, Tottenham have been reduced to fighting for a place in the Europa League.

This win ensured they could still avoid being out of European competition entirely for the first time since the 2009-10 season.

Since Carlo Ancelotti’s first game in charge of Everton on Boxing Day, only Liverpool, Manchester United and Manchester City have earned more Premier League points than the Toffees.

But they haven’t beat Tottenham since 2012 and a first defeat in four games could end their European hopes for this term.