- An interesting video recently made the rounds on social media of a lady claiming to be the daughter of former president, Olusegun Obasanjo

- Faith explained that just like there are side chicks, there are also side daughters and that she is the child of one of the former president’s side chick

Many times, people make statements like ‘there’s nothing we won’t see on Obasanjo’s internet’. Well, it seems people are now seeing things even related to the former president himself.

Just recently, a video made the rounds of a strange lady who claimed to be the side daughter of former president, Olusegun Obasanjo.

The lady who identified herself as Faith said that she was the former president’s side daughter. According to her, just like there are side chicks, side daughters are the children of these side chicks. 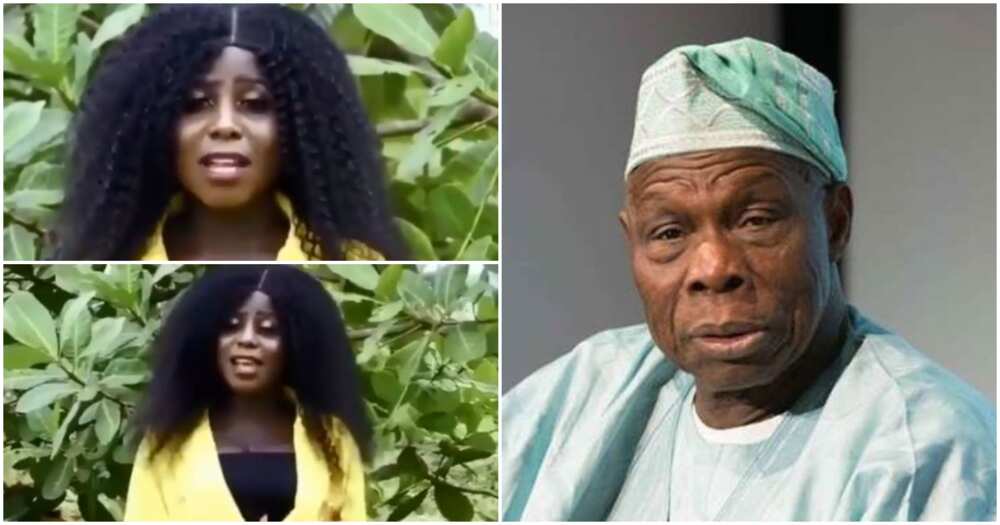 This lady claimed to be former president Olusegun Obasanjo’s side daughter.
Source: Twitter

The lady who claimed to be 21 said that she had lived in Spain all her life and that she decided to come back to Nigeria last year. Speaking further, she said that she was a dual indigene of Abeokuta and Benue state.

According to her, she is a product of a job Obasanjo did in Benue state. Faith said that she and Obasanjo do have father and daughter issues and that the money the former president gave have has been useful to her life because she is now a CEO of Big Man Naija reality TV show and that she owns a resort and hotel which she bought for $1 million USD.

Apparently, a number of people found the video amusing as they did not believe she is actually the ‘side daughter’ of the former president.

See some comments below:

In other news, Legit.ng reported that the daughter of former Oyo state governor, Abiola Ajimobi, Abisola Kola-Daisi, has celebrated her dad on 2020 Father’s Day.

In an Instagram post, the beautiful daughter called Ajimobi her favourite dad, adding that he is God’s greatest gift to her.

She said that Ajimobi taught her so many important things that have become a very big part of her today. Abisola said that she is using today to relive every moment she had with her dad.