Little girl stuns internet users with her yoga poses, set to get a mat from Twitter user (photos)

- The Twitter user went on to pray for the little girl

An unnamed young girl became an internet sensation after photos of her yoga poses surfaced online. The girl's elder cousin called Victor shared the photos on his page on the micro-blogging platform, Twitter.

Yoga is a set of physical and mental exercises intended to give control over the body and mind. Many people have described the exercise as one of the best ways to relieve stress.

The photos showed the young girl sitting on tiles as she showed off her yoga poses.

As soon as the Twitter user dropped the photos of his little cousin, many were struck by her poses. Some people even noted that the young girl has motivated them to start their yoga classes while others revealed that she would be a good ballet dancer.

Meanwhile, of all the beautiful comments, one stood out. The comment was from another user called Oluwapelumi.

According to her, she has had a difficult day, noting that she is not going to lie about it. However, she revealed that the young girl's yoga poses made her smile. 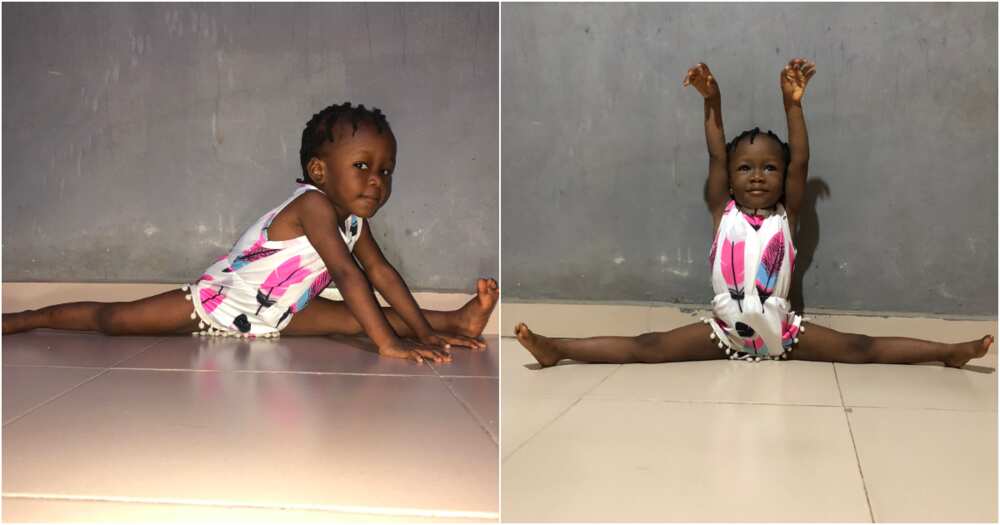 She complimented the little girl's beauty and prayed for her. According to Oluwapelumi, she hopes that the little girl finds happiness every day of her life.

The Twitter user then went ahead to get her a yoga mat. She told her cousin victor who shared her photos to chat with her privately.

In other news, Legit.ng earlier reported that an adorable video of a little girl dancing with a bus driver goes viral.

The heartwarming video started trending on Facebook. In the footage, a little girl could be seen dancing to the beat of a Taylor Swift hit song, while being encouraged by an enthusiastic bus driver.

The video has been liked 10,000 times and attracted nearly 300 comments.