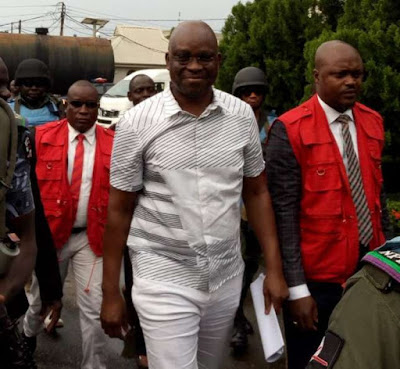 Former Ekiti State Governor, Ayodele Fayose, has reacted to the suspension of Ibrahim Magu as the Acting Chairman of the Economic and Financial Crimes Commission, EFCC.

The EFCC boss was suspended by President Muhammadu Buhari after he spent Monday night in a police cell at the Force Criminal Investigation Department (FCID) Headquarters in Abuja.

This was after a six-hour grilling by a presidential panel, chaired by Justice Ayo Salami, a former president of the Court of Appeal.

The panel was set up to probe various allegations levelled against Magu, following a petition by the Minister of Justice and Attorney General of the Federation, Abubakar Malami, and the Department of State Service (DSS).

Reacting, Fayose urged DSS, EFCC, Police and others to place Magu on “Watch-list”, adding that what goes around comes around.

In a post on his Twitter page, Fayose said: “Just as Magu directed that I be placed on “Watch-list” even when I had immunity as a sitting gov, Magu too must be placed on watch-list so that he won’t run away.

“EFCC, DSS, Customs, Police, Immigration, Army, Navy, Air Force, others, over to you.

“What goes around, comes around.”