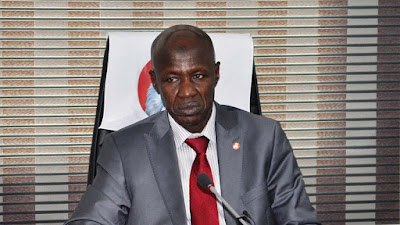 Ibrahim Magu, suspended acting chairman of the Economic and Financial Crimes Commission (EFCC), has been sent back to area 10 force criminal investigation department (FCID) of the police in Abuja where he spent the night on Monday.

A source disclosed this, saying he was moved to detention at the end of questioning by the panel on Tuesday.

He was arrested on Monday and whisked to the presidential villa in Abuja where the panel set up to probe the commission has been sitting.

Some of the aides of the anti-graft czar had earlier moved his personal belongings out of his official residence in the Maitama area of the nation’s capital while security operatives raided his residence at Karu, still in  Abuja.

A family source said the security operatives who carried out the operation found nothing incriminating in the house.

They were said to have left with some documents.

Abubakar Malami, attorney-general of the federation (AGF), had asked President Muhammadu Buhari to sack Magu over some “weighty” allegations.

The AGF had asked President Muhammadu Buhari to sack Magu over some “weighty” allegations, including the diversion of recovered loot.

In addition to allegedly re-looting the recovered loot, Malami accused the acting EFCC chairman of insubordination and misconduct.

An EFCC source said Magu went to the panel with documents to prove that Malami’s allegations were false but surprisingly he has not been asked any question on that.

“He went to the panel with many documents. He has a lot of files on him to respond to the allegations. Surprisingly, the panel has not asked him any question on the issues raised against him,” the source said.