- Some gunmen have stricken havoc in the life of a Nigerian Army Captain, GSM Abubakar

- The criminals shot dead Abubakar along the Okene-Lokoja highway

- The gunmen also kidnapped the deceased's mother and wife

A Nigerian Army officer, Captain GSM Abubakar, with identification number N/13600 was on Sunday, July 5, attacked and killed by some gunmen along the Okene-Lokoja road.

The Nation reports that late Abubakar was on his way to the Armed Forces Command and Staff College, in Jaji, Kaduna from Lagos with his wife and mother when he was shot dead by the bandits.

After confirming that the officer was dead, the culprits who are now in hiding abducted his wife and mother.

Other officers travelling alongside Abubakar narrowly escaped the attack by maneuvring their ways and speeding away from the scene.

The remains of the officer which were first moved to the Federal Medical Centre (FMC) Lokoja have been claimed by his family members. 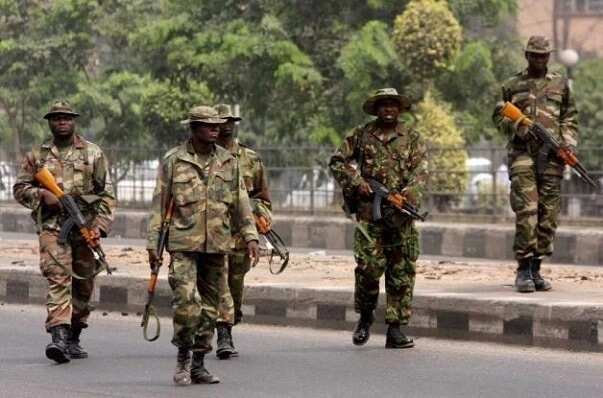 Other officers travelling alongside Abubakar narrowly escaped the attack by maneuvring their ways and speeding away from the scene.
Source: Depositphotos

Meanwhile, Legit.ng reported that the Defence Headquarters (DHQ) had continued to record massive win in the fight against terrorism as Nigerian troops killed 45 Boko Haram/ISWAP terrorists in several operations from June 11 – 18, a period of one week.

This was disclosed by the coordinator, defence media operations, Major-General John Enenche, at a press briefing on Thursday, June 18, at the Defence Headquarters, Abuja.

Eneche speaking on military operations said the soldiers during a counter-attack on Monguno town rescued 33 that were held captives and recovered a large cache of arms, ammunition and equipment.

The defence spokesman went on to note that the Nigerian Military recorded successes against armed bandits operating in the region. The troop carried out aggressive clearance operations where they neutralized scores of bandits.

They caught 3 suspects and freed 6 kidnapped victims amongst other recoveries. Meanwhile, the troops were able to restore peace to Olegeje community in Agatu local government area of Benue state after apprehending a popular militia leader known as Alhaji Audu on Sunday, June 14.

Alhaji Audu was suspected to be responsible for several attacks in the community and has been on the wanted list of security agencies for some time.