Cristiano Ronaldo was on the score-sheet on Tuesday night when AC Milan produced a spectacular comeback from two goals down to defeat Serie A leaders Juventus.

The Portuguese legend scored the second goal in the encounter which makes it his 30th of the season, a milestone he has reached ten times in the last 11 years.

A sensational turning ensured that 33-year-old end up on the losing side, but a moment where he tried to drop deep to get possession cost his side.

His first pass hit the heel of a teammate before the ball bounced back to him. On the halfway line, he then attempted another pass which was intercepted.

Suddenly, Milan were on the break and within seconds Rafael Leao put them 3-2 ahead to complete an astonishing five minute turnaround; the game eventually ended 4-2 in favour of the hosts. 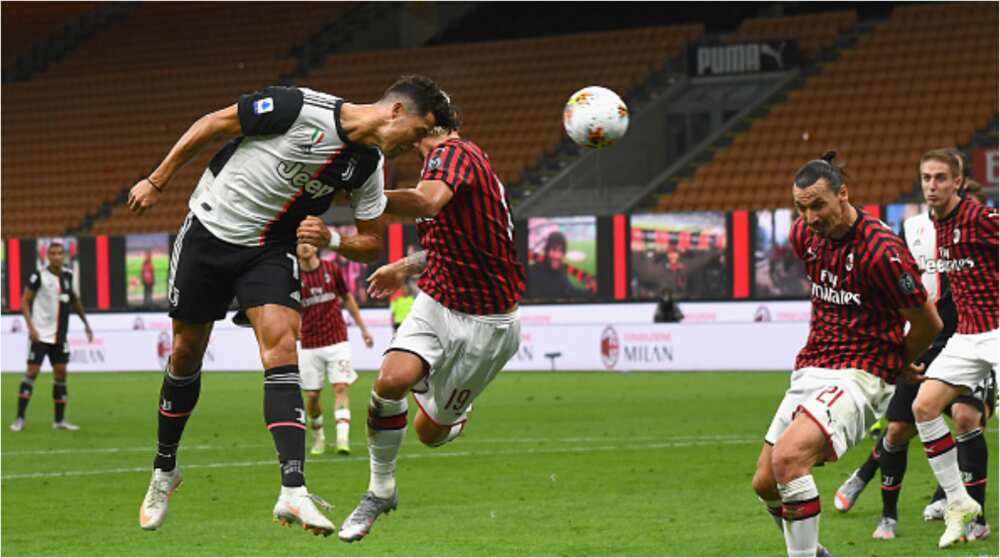 Meanwhile, Zlatan Ibrahimovic's body language to Cristiano Ronaldo before taking his spot-kick against Juventus was priceless.

AC Milan were already two-goals down before the referee awarded a penalty to the Rossoneri after Leonardo Bonucci handled the ball in the box after the hour mark.

And the Swedish striker made no mistake as he sent Wojciech Szczesny the wrong way and put his side back into the game despite Ronaldo's antics in the background.

But moments before the 38-year-old converted the spot-kick, Ronaldo told Szczesny "Tek, you know him (Ibrahimovic)."

And after the goal was scored, Ibrahimovic laughed at Ronaldo in a brilliant exchange between the two football superstars.

Legit.ng earlier reported that Inter Milan are reportedly planning to lure Barcelona legend Lionel Messi to the Italian League with the help of their shirt sponsors.

The Argentine forward's current deal with the Catalans expire in the summer of 2021 and he is yet to renew or sign an extension with the club.

He has recently been linked with a move away from the club following the altercation he had with his employers earlier this season.

And Inter, according to SunSport, is hoping they can exploit his slightly broken relationship with Barca to bring him to Italy.