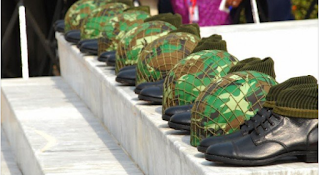 The Nigerian Army has reportedly lost more than 20 soldiers in an ambush by Boko Haram insurgents in Borno state.

Sources disclosed that the deceased soldiers were attached to 25 task force brigade, Damboa in Borno.

The soldiers were attacked along the Maiduguri-Damboa road as they were returning from a five-day clearance operation, on Tuesday.

“At the last count, we had more than 20 soldiers who lost their livers in that unfortunate ambush,” a source disclosed.

“They had been on the operation for five days, and they were just 25 kilometres to reach the brigade headquarters when they ran into the ambush. Some bodies of the slain soldiers have been recovered.”

The source added that many soldiers who were part of the operation have been unaccounted for.

But in a statement, the military 17 insurgents were killed while it lost only two of its men.

“In the aftermath of the encounter, 17 Boko Haram/Islamic State’s West Africa Province criminals were neutralized as several others were believed to have narrowly escaped with varying degrees of gunshot wounds while a cache of arms and ammunition were equally captured by the gallant troops,” he said.

“Regrettably, two valiant soldiers paid the supreme price while four others were wounded in action. However, the wounded in action soldiers have been evacuated to a military medical facility and currently responding positively to treatment.”