- Barcelona vs Espanyol ended in favour of the home team

- Luis Suarez was the saving grace for the hosts

Sergio Busquets started the move from the middle before sending the ball down the left flank where Jordi Alba threaded a low pass to an oncoming Antoine Griezmenn.

The Frenchman sent a backheel pass to Lionel Messi who launched a shot at the goalkeeper but the effort was blocked and the straying ball found Suarez in the six yard box.

He then powered the ball home beyond Diego Lopez to break the deadlock and hand the home team the lead in the 56th minute.

The victory also helped the Catalans close the gap on currently league leaders Real Madrid who have one match in hand.

Coach Quique Setien's men got the game started on a bright note with the hosts trying to draw the first blood, but the visitors managed to keep their backline airtight.

Messi and Griezmann made incredible moves in the first 15 minutes of the encounter but the visitors' keeper maintain his cool and stopped every misile aimed at him.

Barcelona, as usual, enjoyed massive ball possession as they dominated most part of the opening half but they could not just find the back of the net.

Meanwhile, Ansu Fati came in for Nelson Semedo at the start of the second half but only lasted about six minutes after being handed a marching order for a terrible tackle on Fernando Calero.

Barely three minutes later, Espanyol too were reduced to 10 men after Pol Lozano was sent off for a rough tackle on Busquets in the 53rd minute. 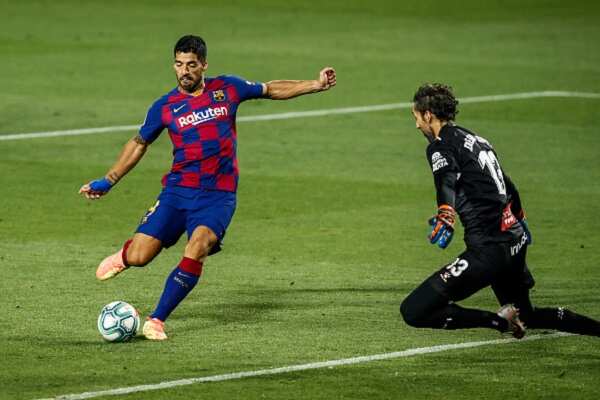 In the end, Barcelona smiled home with maximum points and they will hope their rivals Real Madrid drop points in their next game against Alaves on Friday, July 10.

Legit.ng earlier reported that Inter Milan are planning to lure Barcelona legend Lionel Messi to the Italian League with the help of their shirt sponsors.

The Argentine forward's current deal with the Catalans expire in the summer of 2021 and he is yet to renew or sign an extension with the club.

He has recently been linked with a move away from the club following the altercation he had with his employers earlier this season.