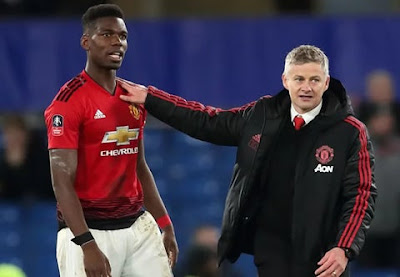 Manchester United manager Ole Gunnar Solskjaer will not seek huge funds for transfers this summer due to the economic realities of the coronavirus crisis but is keen for the club to tie down Paul Pogba to a long-term contract.

United executive vice-chairman Ed Woodward has warned it will not be “business as usual” in the transfer market and said during football’s shutdown from COVID-19 that “speculation around transfers of individual players for hundreds of millions of pounds this summer seems to ignore the realities that face the sport”.

The form of Solskjaer’s men since returning to action last month has also suggested United do not need to spend tens of millions in the upcoming window.

The emergence of teenager Mason Greenwood – who has scored three times in his last two games – has helped quieten speculation over a move for Borussia Dortmund’s Jadon Sancho.


“There’s got to be realism,” Solskjaer said. “I think the whole world has changed, both financially and the perception that we’ve got on values.

“So every time I put the case in front of Ed, I think it’s a sensible one and it’s a realistic one.

“I think I’ve proven to the club that I’ve always got the club in the front of my mind and the best for the club. I’ll always think long term and try to be making good deals. I’m always quite careful with money, my own personal money as well.”

Pogba’s return to fitness has been a key factor to a run of four wins and a draw from five games since the restart.

The French World Cup winner looked destined to leave Old Trafford for the second time in his career prior to the pandemic.

However, interest from Real Madrid is now unlikely to materialise this summer and Pogba has formed a formidable partnership with Bruno Fernandes in midfield.

Pogba’s contract expires next summer, although United have the option to extend that deal by a further year.

Midfielders Scott McTominay and Nemanja Matic have recently penned new deals with the club and Solskjaer is hopeful Pogba will follow suit.

“Of course we want to keep the best players around the club. We want to build a squad for the future.

“Scott and Nemanja, they’re in a similar position but at different stages in their careers. One at the start, one really experienced. We also need players in that mid-range group, so hopefully, we can do something.

“I know that since Paul’s come back now he’s looking better and better. He’s just enjoying his football and let’s see where it takes us.”

Umahi to IGP: I don’t know who smuggled us to Awka, remove us from Zone 13