Leandro Trossard reduced the hosts' deficit on the stroke of half time but Salah's 76th-minute effort finally put the game beyond the home team as it ended 3-1.

Meanwhile, his brace in Wednesday's encounter ensured he was still in the race for the Premier League golden boot award after increasing his number to 19 so far this season. 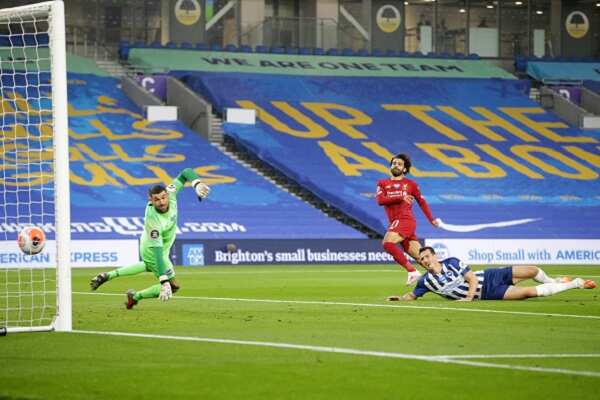 Only Jamie Vardy (22) and Pierre-Emerich Aubameyang (20) have more goals than the Liverpool star who has picked up the prestigious prize in the last two seasons.

Although, he finished as joint highest goalscorers with teammate Sadio Mane and fellow African Aubameyang at the end of the 2018-19 season - with all of them being awarded for their efforts.

Souness, after watching the Egyptian play, he concluded that the individual award appears more important to him than a collective one.

"He was at it tonight from the first minute. I think it [the Golden Boot] is important to him," Souness told Sky Sports when asked about Salah.

"You’ve seen his reaction when people weren’t finding him late on in the game in the last third. He was shooting at every opportunity, and his teammates will not have been happy with him on two or three occasions.

"But he’s always selfish. I think tonight he was super selfish. He really wants his Golden Boot.

"They’ve won the league, so he’s done his bit for the team, he’s played his part, he’s got the goals, he’s been fabulous, and he wants that Golden Boot.

"And he thinks he’s in a team that creates chances, so he thinks it’s very much still on for him."

Though Souness believes that an average attacker would be greedy for goals, he said that Salah's desire to score is unrivaled and has led to a fragile relationship with Mane.

"I think Mane has fallen out with him in the past over occasions where he feels he should have passed to him to score a goal and he shot himself.

"So I think there is an element in all goalscorers that they’re greedy at times, but I think he takes it to another level."

However he may have been perceived, Salah became the quickest Reds player to reach 100 goals for the club.

Legit.ng earlier reported that Liverpool’s Egyptian star Mohammed Salah recently took to address the question on his future with the Merseyside club amid interest from other top European clubs.

Salah joined Liverpool in 2017 as the club was enjoying a steady rise and has since won the Club World Cup, Champions League and most recently, the Premier League title.

Also, Legit.ng revealed that Mohamed Salah has proven that he is concerned with the welfare of his community in Egypt by donating an ambulance center.

Raised in the city of Nagrig in Egypt, Salah is revered by his people as he is the first player from his town to play in the Premier League.

Nagrig is situated in the Egyptian governorate of Gharbia and the latest gesture by Mohamed Salah was announced by Tarek Rahmy who is the mayor of the city.