The ongoing probe of the embattled acting chairman of the Economic and Financial Crimes Commission (EFCC), Ibrahim Magu, continues as he was questioned over more allegations.

The probe which entered day three on Wednesday, July 8, took an interesting turn after the Justice Ayo Salami-led presidential panel quizzed him over 380 houses and seven vessels loaded with crude oil.

Magu who was also confronted about the disposal of assets worth N37 billion was asked to give an account, Vanguard reports.

The embattled boss of the anti-graft agency is being grilled by a presidential panel following over 20 allegations leveled against him by Attorney-General of the Federation and Minister of Justice, Abubakar Malami (SAN). 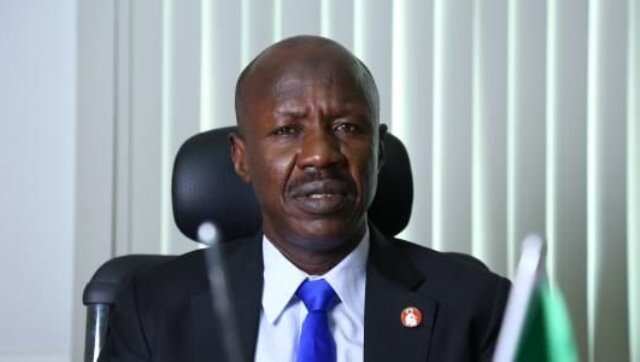 Earlier, Legit.ng reported that witnesses were reportedly invited to testify in the ongoing probe of the embattled acting chairman of the EFCC.

Magu was grilled for over 10 hours over the allegations leveled against him by Malami, after which he returned to the custody of the Force Criminal Investigation Department (FCID) where he is being detained.

The probe is getting widened as the panel invited top officials of the EFCC and the Nigerian Financial Intelligence Unit (NFIU) to respond to relevant questions.

The panel also reportedly clarified that it had no information that Magu had been suspended from office.

In other news, Olusegun Adeniyi, chairman of This Day editorial board, said Magu reportedly thwarted a move by Theophilus Danjuma, former defence minister, to purchase an aircraft, around the same time some EFCC agents raided the residence of a former Nigerian head of state, Abdulsalami Abubakar.

Adeniyi claimed that this move by Magu against Danjuma and Abdulsalami (known to be President Muhammadu Buhari's allies) were carried out without his knowledge.

The renowned journalist who a media aide to a late Nigerian former president, Umaru Musa Yar’Adua, added that it took some time for President Buhari to convince Danjuma that he was not aware of Magu's move against him.