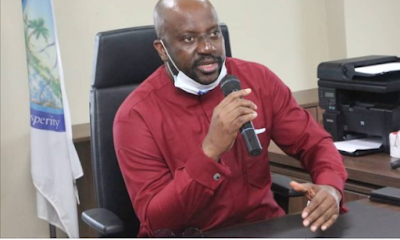 The interim management committee (IMC) of the Niger Delta Development Commission (NDDC) was on Thursday grilled by an ad hoc senate panel.

The committee is being investigated over the N3.14 billion it disbursed to its 4,000 workers and police commands in nine states as COVID-19 relief.

The panel was set up to investigate the alleged mismanagement of N40 billion by the interim committee following a motion sponsored by Thompson Sekibo, senator representing Rivers east, in May.

Also, Cairo Ojougboh, the acting director  on projects, said there is “nothing to chop (embezzle) in NDDC”.

There have been allegations and counter-allegations following the decision of the upper legislative chamber to probe the commission.

While Peter Nwaoboshi, chairman of the committee on NDDC, accused Godswill Akpabio, minister of Niger Delta affairs, of getting a fencing project of N300 million, the commission said the accuser got a N3.6 billion contract using 11 companies as fronts.

The interim management also accused the federal lawmakers of putting over 500 non-existent projects in its 2019 budget.

Speaking at the investigative hearing, Olubunmi Adetunbi, chairman of the ad hoc panel, said it is “highly disturbing” that one unnamed official got N10 million as relief for COVID-19.

“Highly disturbing is the fact that based on the records of payment of such funds, a whopping N10 million was given to a single staff while two other staffers collected N7 million each.

“Also included in the COVID-19 pandemic relief largesse, as clearly stated in your submitted financial documents, is N475 million given to the police commands for purchase of face masks and hand sanitizers for men and officers across the nine states in the Niger Delta region.”

Responding, Pondei said they spent the money to cushion the effects of COVID-19.

“They were for the youths of Niger Delta. It was to cushion the effects of the pandemic. Youths were idle and to avoid violence, there were paid as palliative,” Pondei said.

“We also took care of ourselves, paid staff and gave them more money to take care of themselves.”

The MD also said the commission has over 150 police officers attached to it who provide security, adding that this is aside police commands in the region given N475 million.

‘THERE’S NOTHING TO CHOP AT NDDC’

On his part, Ojougboh said no kobo is missing at the commission.

Ojougboh said Nwaoboshi and his counterpart at the house of representatives have turned the NDDC into a cookie jar.

“No one kobo is missing or misapplied since the coming into force of the IMC,” he said.

“The budget of NDDC since 2001 has always been bastardised by the chairmen of NDDC in the house and senate. They should allow the NDDC to grow. They want to create confusion so that the president will remove us.

“We have not awarded any contract asides the COVID-19 contract which was done by the President. We refused to do so, so as not to add to the confusion. The major interventions for COVID-19 were medical, palliatives and publicity.

“There is nothing to chop in NDDC and that is the truth of the matter. Everyone listening to this today will know that until the necessary things are done, the NDDC will die a natural death.

“The hands of the chairman of the senate committee on Niger Delta are too soiled from turning the NDDC into a ‘cookie jar’ for him to be an objective investigator.”

The hearing continues on Friday.

In October 2019, President Muhammadu Buhari ordered a forensic probe of the commission’s activities from 2001 to 2019.

The interim management is meant to undertake the audit.