- Fernandes, Greenwood and Pogba were all on target for Solskjaer's side

Bruno Fernandes and Mason Greenwood continued their goal-scoring form as the pair found the back of the net in the first half to leave the hosts trailing.

Jack Grealish had the best chance to put Aston Villa ahead in the 18th minute but missed the target by inches, before Trezeguet hit the post seven minutes later with a curling low shot.

United went on to punish Villa in the 28th minute as Fernandes slotted home from the penalty spot after Konsa was adjudged to have fouled the Portuguese midfielder.

The Red Devils had another penalty appeal 10 minutes later following Douglas Luiz's tackle on Marcus Rashford but the referee could hear none of that.

The side, however, doubled the advantage through Greenwood who powered home an explosive finish to make it 2-0 at the stroke of half time. 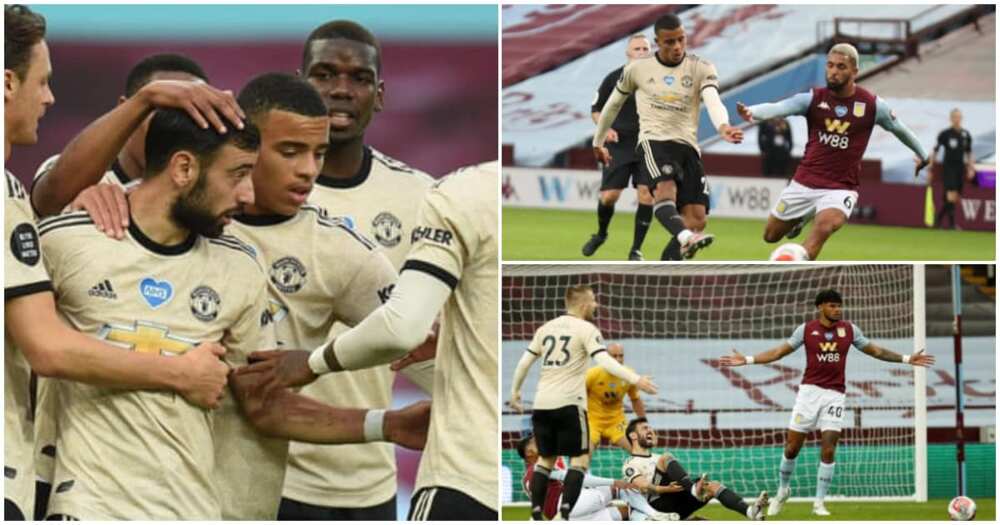 The second half of the match saw United continue from where they left as Paul Pogba curled a low shot off Fernandes' assist to put the game beyond the hosts.

The Portuguese midfielder set up Anthony Martial for what could have been United's fourth but the Frenchman rattled the bar instead as the fixture finished 3-0 at Villa Park.

Old Trafford dwellers remain fifth on the standings with 58 points, just one off fourth-placed Leicester City and two off Chelsea who occupy third place.

Villa, meanwhile, face the prospect of dropping back to Championship as they are four points off safety in 18th with just four matches to wrap up the campaign.

Earlier, Legit.ng had reported how Manchester United boss Ole Solskjaer explained that one of his priorities at the end of the ongoing Premier League season is to keep France international Paul Pogba.

There has been serious uncertainty surrounding the future of Paul Pogba at Manchester United with reports linking him with a move away from Old Trafford.

Last year July, the World Cup winner explained that he wanted a new challenge with serious speculation that he could be on his way to join Spanish giants Real Madrid.