EFCC came to my guest house in error -Abdulsalami 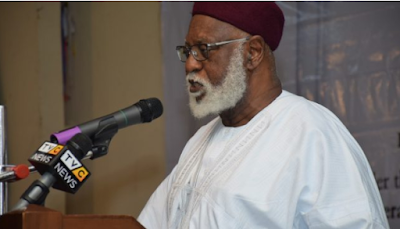 Abdulsalami Abubakar, former head of state, says operatives of the Economic and Financial Crimes Commission (EFCC) came to his guest house in error in 2017 but did not conduct any search of the property.

In a press statement issued on Thursday evening in reaction to media reports that Ibrahim Magu, the acting chairman of the EFCC, recently conducted a search in his Minna residence, the retired general said his house has never been searched by the agency or any other security outfit.

The statement was signed by his military assistant, J Mfon, a retired army captain.

He said: “The attention of His Excellency General A A A Abubakar has been drawn to reports that the Economic and Financial Crimes Commission (EFCC) searched his house in Minna, Niger State, on the orders of its Acting Chairman, CP Ibrahim Magu, and HE feels the need to put the record straight: HIS HOUSE HAS NEVER BEEN SEARCHED BY EITHER EFCC OR ANY SECURITY AGENCY.

“However, sometime in 2017 operatives of the Commission from Kano zone came to Minna to search a house in Tunga. The team ended up at His Excellency’s Guest House in Minna and told the security officers on duty that they had instructions from their zonal head to search the property.

“The officers said since the numbering of houses in Tunga was haphazard, it must be a case of mistaken identity. When CP Magu was contacted, he said he was not aware of the operation. Thereafter, the EFCC team from Kano left. His Excellency’s understanding is that they realised they came to the wrong address. However, no search was conducted in the guest house.

“His Excellency as a rule does not comment on media publications directed at or concerning him. He has taken this step in view of the reactions these reports are generating. His Excellency felt the need to provide this important clarification due to the ongoing media frenzy insinuating His Excellency’s role in Magu’s issue.”

When TheCable contacted Olusegun Adeniyi, chairman of THISDAY editorial board who broke the news in his weekly column on Thursday, he said his anecdotes had been misinterpreted by some readers to mean Abubakar and Theophilus Danjuma, former minister of defence, had anything to do with the travails of Magu, who has been suspended as EFCC chairman and is currently under detention.

Adeniyi said: “Yes, General Abdulsalami called me to explain that he had no problem with Magu and that the house in question was a guest house and it was by mistake. Mrs Daisy Danjuma also called me earlier in the day. She confirmed they recently purchased a plane to replace the old one but there was no EFCC problem with the Cheque which she said she signed. She said her husband did not complain about Magu.

“I think the problem is that some readers are interpreting my anecdote to mean that both Danjuma and Abdulsalami had anything to do with the travails of Magu. I made no such claim in my piece.”

In his article, Adeniyi had written: “Former Defence Minister, Lt General Theophilus Yakubu Danjuma (rtd) was recently at the villa to see President Muhammadu Buhari. It was a visit borne out of rage. A billionaire oil tycoon, Danjuma had paid for the purchase of an aircraft. His cheque bounced! The order to withhold payment, he was told by his banker, came from Magu!

“From what I gathered, it took some time before the president could convince Danjuma that he knew nothing about what was clearly power mongering by a reckless public official.”

Magu is facing a presidential panel over his stewardship at the anti-graft agency.

- Many Lagosians who tested positive for coronavirus are nowhere to be found - Prof. Akin Abayomi, Lagos health commissioner disclosed this on Saturday- The