Thomas Dennerby could be making a sensational return to become coach of Super Falcons for the second time, Complete Sports reports.

The Swedish manager abandoned the women's national team after failing to qualify them for the Tokyo Olympic Games.

Dennerby in 2019, took up the appointment of becoming the national U-17 coach of Indian after he left Nigeria.

Completesport claims that a member of the NFF Technical and Development Committee revealed that the 60-year-old is desperate to return to Nigeria and the Super Falcons to the 2023 World Cup. 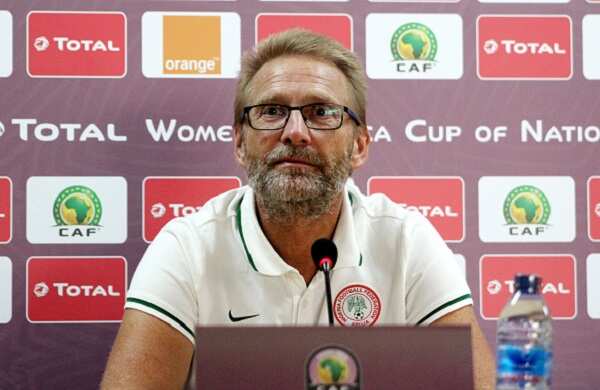 “I can confirm to you that Dennerby is still interested in coaching Super Falcons. He has been sending emissaries to big wigs of the Federation about his intention to return to the job. He has also been asking some senior national team players to insist on his return instead of hiring a new coach,” the source told Completesports.com

“He wants us to keep the job waiting for him till after the FIFA Under-17 World Cup to be hosted in India in March 2021. He has forgotten that his sudden departure on the eve of our Olympic qualifiers cost us the chance of qualifying for the Games. He left us before the end of his contract.

“Dennerby even turned deaf ears to appeals made to him to reject the India job and guide the Super Falcons through the Olympic qualifiers with an improved contract by the new Sports Minister, Mr Sunday Dare. Who is he? He is not indispensable, so we would not reconsider his return to Super Falcons.

“We have moved on and all things being equal, we should be announcing a new coach of Super Falcons and other age grade teams soon,” our source concluded.

The 60-year-old tactician was said to have revealed that some influential members of the country's football governing body were interfering with his job.

Dennerby, who led the Super Falcons to Africa Women Cup of Nations triumph, guided the team to 3-0 aggregate win over Libya in the 2020 Olympic Games qualifiers.