Big blow for Arteta as Arsenal star banned for 3 matches, will miss games against Tottenham and Liverpool

Eddie Nketiah’s initial yellow card was changed into a red after referee Chris Kavanagh consulted VAR over his late tackle on Leicester City’s James Justin on Tuesday night at the Emirates stadium.

The Foxes held the Gunners to a 1-1 draw as Arsenal’s hope of finishing in the top four suffers huge setback.

Nketiah came on as a substitute in the second half and was on the pitch for barely four minutes before his mistimed tackle appeared to have hit Justin badly.

The 21-year-old was consequently suspended and Arsenal’s quest to get the red card decision overturned has been ruled out by the FA as he will now proceed on the mandatory three-match ban. 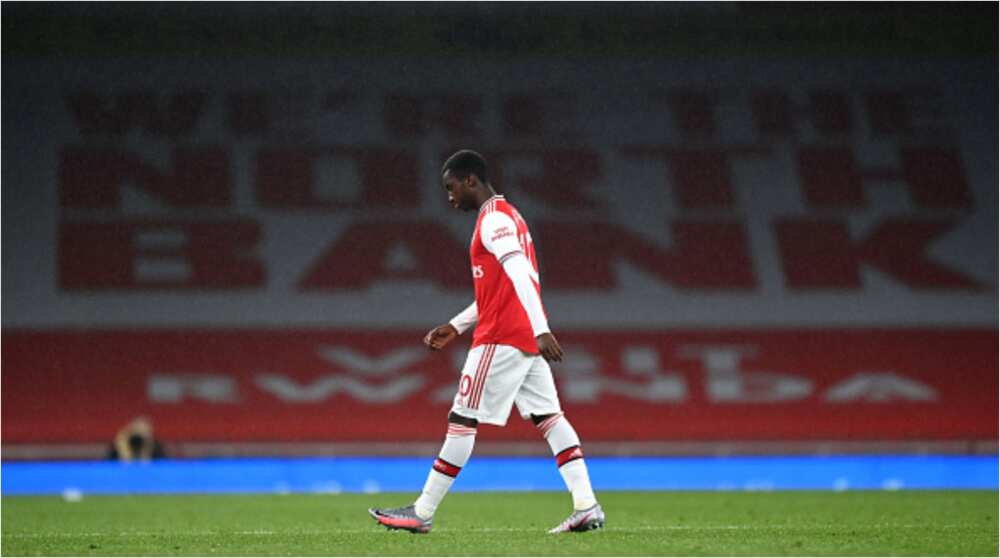 The England U21 international has hit four goals in his last 13 appearances, the latest of which came during a 2-0 victory away at Southampton last month.

The 21-year-old joined Arsenal last two seasons from Lorient under former Arsenal boss Unai Emery and has been impressive since he got to the first team at the Emirates stadium.

Last season, the Frenchman was among the Arsenal players who reached the final of the Europa League before losing the final against Chelsea.

Presently, Guendouzi is not having things rosy at the Emirates stadium as he has been frozen out of the first team by Arsenal boss Arteta.

Legit.ng earlier reported that with Juventus desperate in having Chelsea’s Jorginho in their team, the Old Lady have offered Arsenal legend Aaron Ramsey or possibly Adrien Rabiot to the Premier League club.