- The acting chairman of the EFCC, Ibrahim Magu, has faulted a report claiming he gave N4 billion to Vice President Yemi Osinbajo

- Magu told a presidential investigating panel that the report is false

Magu, who is under investigation by a presidential panel, was said to have made the denial when reacting to claims in the media that he transferred N4 billion to Osinbajo, The Nation reported. 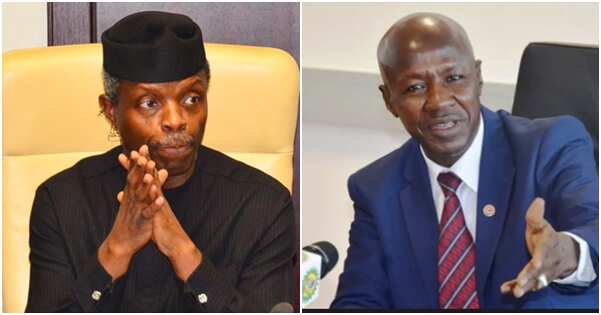 The acting EFCC chairman said he does not have access to such huge amount of cash. Credits: Photo collage from Guardian/EFCC
Source: UGC

A member of the investigating committee said Magu described the report as false, pointing out that he does not have access to such huge amount of cash.

He reportedly said he did not order the transfer of N4 billion to the vice president or to anybody and demanded for the matter to be clarified.

“I did not tell the panel that I gave the Vice President N4 billion. Where will I get such money? Do I have access to such funds? It is part of mudslinging. Please clear this. I do not have any control of such cash, I did not order the transfer of N4 billion to the VP or to anybody," sources quoted Magu as saying.

Meanwhile, following allegations that Yemi Osinbajo received funds from the suspended acting chairman of the on EFCC Ibrahim Magu, the vice president has written to the Inspector-General of Police, Mohammed Adamu.

This development is coming after an unconfirmed report broke out on social media that Magu gave Osinbajo N4 billion after allegedly embezzling over N39 billion.

The unsubstantiated report which has been widely circulated on various social media platforms claimed that the EFCC boss told the panel that he gave Osinbajo the funds.

According to Premium Times, Osinbajo in a letter through his lawyers, Taiwo Osipitan, on Wednesday, July 8, petitioned the IGP to investigate allegations, adding that the claims were not true and defamatory.

Abubakar Malami, the attorney-general of the federation, was also copied in the letter. It would be recalled that the vice president's spokesperson, Laolu Akande, dismissed the report describing it as fake news.

Akande said the report was "calculated to confuse and concocted to smear" the vice president's image, adding that Osinbajo will "never be involved in any such shady activities".

"Inundated by wide circulation of Fake News about VP's purported involvement in some EFCC recovery billions, pls rest assured they're all LIES: calculated to confuse and concocted to smear Prof. Osinbajo's image. The VP hasn't & will never be involved in any such shady activities," he tweeted.