Real Madrid restored their four points gap over Barcelona on the Spanish League table after beating Deportivo Alaves 2-0 at the Santiago Bernabeu.

Los Blancos are definitely not going to allow any slip up with just three matches to wrap up the 2019-20 season after Karim Benzema and Marco Asensio scored a goal each in either half.

Frenchman Benzema opened scoring for the Galacticos through the spot in the 11th minute following a foul on Rodrygo at the edge of the box down the left flank.

The Brazilian made an audacious move towards the visitors' danger zone from his wing before being brought down by Ximo Navarro.

Meanwhile, barely five minutes after resumption, Asensio doubled the hosts in the 50th minute after tapping into the net a close-range opportunity created by Benzema.

Coach Zinedine Zidane's men will hope they can maintain their stance on the log till the end of the season so they can be crowned champions.

Real Madrid's last three games of the season are against Granada, Villarreal and Leganes - with two of them away from home.

They will, however, continue their quest for Champions League glory on August 7 when they travel to the Etihad to battle Manchester City in the second leg of their first knockout stage clash. 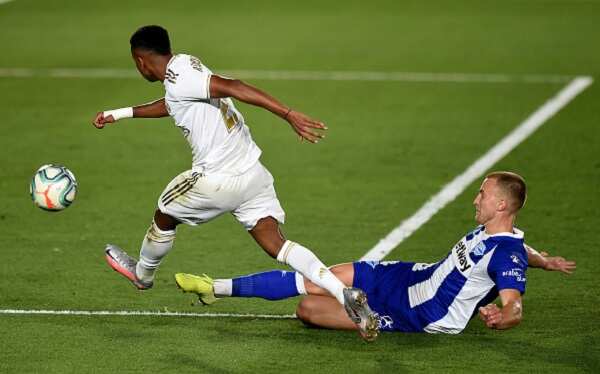 Real Madrid vs Alaves: Rodrygo wins penalty for the hosts in the early minutes of the game - credit: Getty Images
Source: Getty Images

Real remain the most successful team in the history of the European competition with 13 titles to their credit.

Legit.ng earlier reported that Eden Hazard limped out of training with an ankle problem as the Real Madrid star is set to sit out on the sidelines again.

The Belgian midfielder has returned to form since the three months break but the recent injury scare could come as a major blow to Zinedine Zidane's side.

The Belgium international has admitted that he struggles with his diet and fitness - but managed to get into shape during the coronavirus-enforced break in the season.