- Actress Regina Daniels’ dad appears to have made peace with her marriage to billionaire, Ned Nwoko

Actress Regina Daniels’ father, Barrister Jude Ojeogwu, appears to have put his grudges aside as it concerns the marriage of his daughter to billionaire, Ned Nwoko.

Regina’s father was spotted among close family members and friends that came out to celebrate with her during her child’s naming ceremony which took place on Friday, July 10.

An excited Regina was spotted beside her father as they were captured by a photographer at the ceremony. He was also seen carrying his grandchild during the photo session.

A different portion of a video clip going around on social media captured the movie star’s father speaking with some journalists who were present at the naming ceremony. 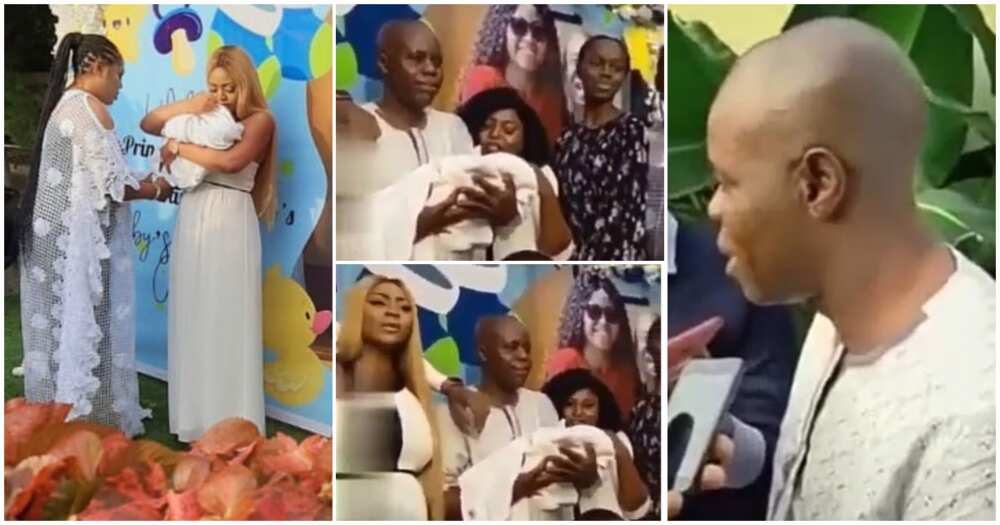 Check out the clip below:

Some months ago, Regina’s father surfaced on social media after he came out to speak against her marriage to Ned Nwoko. The man had claimed that his daughter and her siblings tricked him into believing that there was nothing going on between her and 59-year-old Nwoko.

According to him, he invited Regina and her siblings to his house in Lagos to find out if the report he was hearing about her romance with an old man was true but they all denied.

Shortly after he spoke out, Legit.ng reported that Regina’s uncle, Ojeogwu Tony Molanto, confirmed Ojeogwu as her biological father, and claimed that she denied the man in public but secretly pacified him with a jeep as compensation for getting married without his consent.

In a swift reaction, her mother, Rita Daniels, reacted to Molanto's allegations and they both exchanged bitter words which led to the spilling of dirty family secrets.

Big Brother Naija organizers have apologized for taking sides in the intriguing love triangle involving Erica, Laycon and Kidwayya. In an article posted on its official