Why Buhari should declare herdsman as terrorists - Nigerian governor

- The Benue state governor, Samuel Ortom, made the demand when condemning recent killings by suspected herdsmen in the state

The Benue state governor, Samuel Ortom, made the demand on Saturday, July 11, when condemning the recent killings in several parts of the state by suspected herdsmen, Channels TV reported. 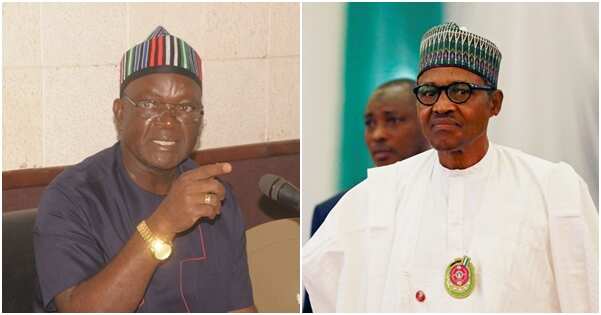 According to a statement issued by his spokesperson, Terver Akase, the Benue state governor accused herdsmen of violating the 2017 law that prohibits open grazing of livestock in the state.

He said only a terrorist group would deliberately choose to violate the anti-open grazing law.

Ortom pointed out that declaring armed herdsmen as terrorists would end the wave of impunity and guarantee the rule of law in the state.

The governor urged people of the state to be vigilant report any suspicious persons to security agencies.

Meanwhile, the House of Representatives has urged the federal government to stop the entry of foreign herdsmen into Nigeria.

This was contained in a motion brought to the lower chambers of the National Assembly by the minority leader in the House of Representatives, Honourable Ndudi Elumelu.

Contributing to the motion, lawmakers stated that herdsmen have been on a rampage, destroying farmlands and killing innocent Nigerians.

They also noted that they are aware that security agencies have consistently said the herdsmen come from neighbouring African countries.

The motion was, thereafter, unanimously adopted by the House. Armed herdsmen have caused havoc in various parts of Nigeria in recent times.

In another report, Yakubu Bello, former chairman of Miyetti Allah Cattle Breeders Association of Nigeria (MACBAN), Oyo state chapter has lamented the loss of about N5 billion by the association due to Covid-19 crisis.

Bello made this known while fielding questions from journalists in the Oke-On axis of the state on Tuesday, May 12, saying the pandemic has wreaked havoc on the cattle-rearing business.

Legit.ng gathered that Yakubu spoke against the backdrop of the allegation levelled against the herders by residents of the state.