A former governor of Ekiti state, Ayodele Fayose, has alleged that the suspended acting chairman of the Economic and Financial Crimes Commission (EFCC), Ibrahim Magu, sold recovered assets to his associates.

Fayose who made the allegation in a tweet on Friday, July 10, called for a full investigation into what happened to the seized properties under Magu. 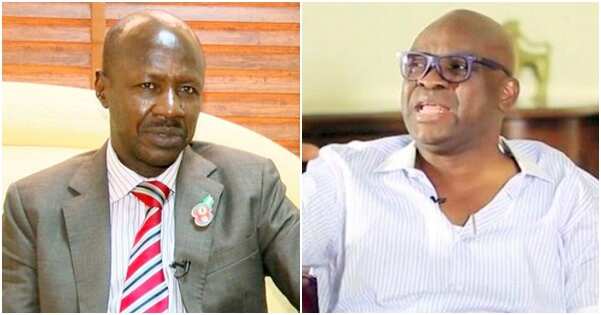 Fayose said those who must have helped Magu to launder money must be revealed. Credits: Photo collage from Icirnigeria/Pulse.ng
Source: UGC

He said the probe by the presidential paned into the activities of the EFCC should not only be aimed at removing Magu from office, adding that loots allegedly re-looted under Magu's watch must be re-recovered.

The former governor alleged that properties seized by EFCC were bought by associates of Magu, including some so-called human rights lawyers.

He said Nigerians must know beneficiaries of the seized properties and how they were sold.

Fayose also stated that those holding money and properties in trust for Magu as well as those who must have helped him to launder money must be revealed and brought to book.

Below are tweets by Fayose making the allegations against Magu:

Meanwhile, Wahab Shittu, a counsel to the suspended acting chairman of the EFCC, Ibrahim Magu, on Friday, July 10, pleaded with the presidential investigation committee to grant his client bail.

The Nation reports that he said Magu needed the bail because the print and electronic media had taken undue advantage of his detention to launch a campaign of calumny against him.

Legit.ng gathered that Shittu made six other demands including making the terms of reference of the committee available to Magu and giving him the opportunity to know the allegations against him.

He said witnesses were being called and examined by the committee behind Magu’s back and at the same time disallowing him and his counsel from participating in the proceedings involving such witnesses.

Shittu made the demands on Friday, July 10, in a letter of plea to the panel.