Loyalty has its own reward as 77-year-old grandmother also known as Alhaja Hasaan Nosimot Amoke, who is a staunch Arsenal was rewarded with another cash gift.

She received a cheque of N250,000 from the Authentic Nigeria Football Supporter's club as it was presented to her for her followership.

The cheque was donated by the Olori Odo of Odua Land Hon. Rotimi Ajanaku as his name was written on the amount.

Mama Amoke will be living the dream as she will be taken on an all-expense-paid tour to the famous home ground of her darling club the Emirates Stadium.

She was also handed an ambassadorial role by the association and was reportedly hosted to a warm reception at her Surulere residence on July 11.

The Septuagenarian gained popularity on social media after she was caught on camera analyzing Arsenal's game after they lost to Man City in the league. 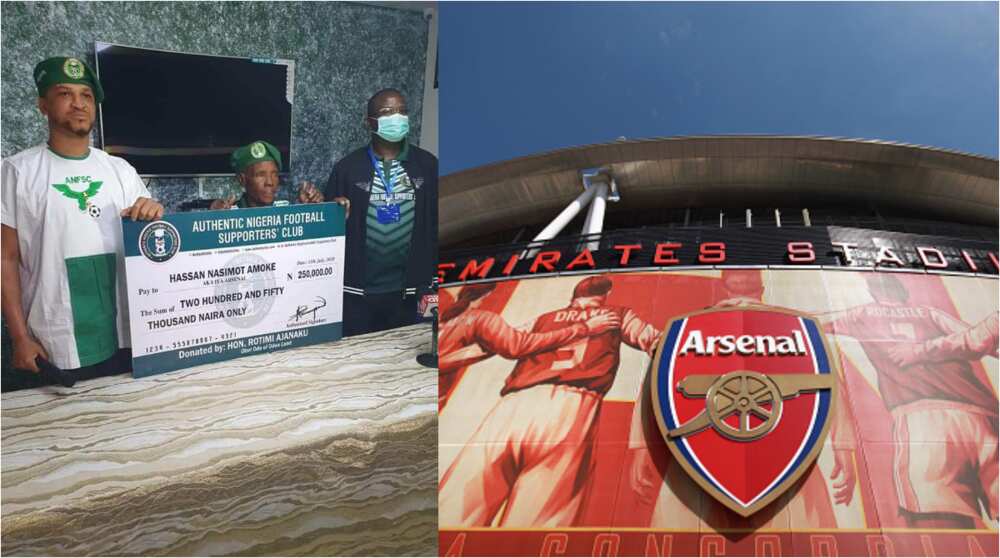 She also claimed that despite losing to Pep Guardiola's side, the Gunners emerege victorious against Southampton.

She was also grateful Chelsea defeated City helped Liverpool win the Premier league and believed it would boost Arsenal's chances of playing in Europe next season.

Meanwhile, Legit.ng had earlier reported that a video of a Nigerian grandma who seems to be a staunch fan of Arsenal football club of England has surfaced online as she is seen dissecting latest happenings in the Premier League.

In the footage, the mother who spoke in the Yoruba dialect expressed her undying love for the Gunners as she gave accurate analysis of the latest in the EPL.

She explained that although she loved the way Chelsea defeated Manchester City recently, if the result had gone the other way, it would have favoured Arsenal.