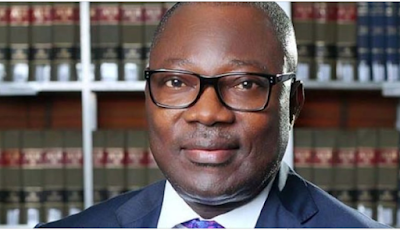 Tayo Oyetibo, senior advocate of Nigeria (SAN), says the detention of Ibrahim Magu, suspended acting chairman of the Economic and Financial Crimes Commission (EFCC), is in violation of his rights.

Magu is being probed over allegations of corruption by a panel set up by President Muhammadu Buhari.

He was arrested last Monday and has been in detention since then.

Oluwatosin Ojaomo, Magu’s lawyer, had written to Mohammed Adamu, inspector-general of police (IGP), seeking bail for his client on self-recognition.

But the former EFCC boss is yet to be granted bail.

In a statement on Sunday, Oyetibo said though the allegations against Magu border on serious economic crime, he has not lost his fundamental rights as enshrined in section 33 of the Nigerian constitution.

“Although the allegations made against Magu are said to be documented and border on serious economic crimes and abuse of office, that does not mean that he has lost his constitutional rights,” he said.

“Amidst the cacophony of allegations of serious crimes made against Magu, the law of Nigeria still speaks the same language which is expressed in section 35 of the constitution of the Federal Republic of Nigeria which provides to the effect that every person who is arrested or detained upon reasonable suspicion of his having committed a criminal offence shall be brought before a court of law within a period of 24 hours in the case of an arrest in a place where there is a court of competent jurisdiction within a radius of 40 kilometres otherwise he ought to be released on bail.

“It cannot be said that there is no court of competent jurisdiction within a radius of 40 kilometres with Abuja where Magu was arrested.

“While it may be argued that the EFCC which Magu hitherto headed was notorious for ignoring this constitutional provision in relation to citizens who were arrested under him, the law of karma has no place under our constitutionalism.

“For these reasons, Magu ought to be released on bail forthwith as otherwise, the government would be acting excessively in breach of his rights.”