Mikel Arteta's men took the lead in the 16th minute through a stunning long-range shot from Alexandre Lacazette.

The Frenchman combined well with Granit Xhaka at the edge of the 18yard box before launching a super shot that beat the reach of Hugo Lloris. 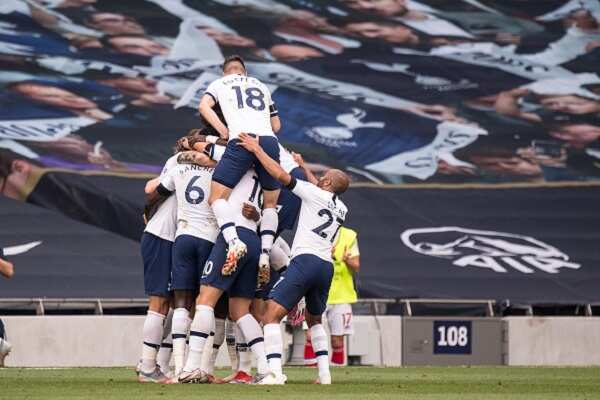 The Korean benefited from a stray pass Sead Kolasinac to the Brazilian before finding the back of the net in the game.

Alderweireld headed his side to victory towards the end of the game after rising to meet with Son's corner kick.

Pierre-Emerich Aubameyang's effort was denied by the woodworks with danger cleared by the hosts.

The victory, however, meant Spurs are on course for Europa League qualification after rising above Arsenal on the log with two points with three more games left this campaign.

Arturo Vidal grabbed the only goals of the game as Quique Setien's men are not giving up on the title race yet.

Antoine Griezman had lier missed an earlier chance to put la Blaugrana in the lead but the spurned his effort on goal.

But in the 15th minute, Lionel Messi equaled Xavi Hernandez's record for the most assists in a La Liga season, as he provided his 20th of the season for Vidal who also produced an instinctive finish.