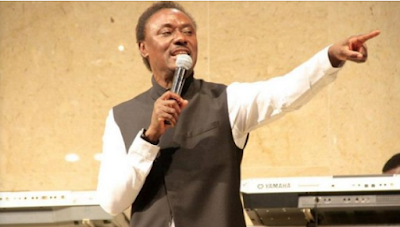 Chris Okotie, the founder of the Household of God Church, has joined conspiracy theorists alleging that the COVID-19 pandemic is a grand conspiracy to reduce the global population.

In an 80-minute video on YouTube, Okotie accused Bill Gates, Microsoft founder, of leading a global conspiracy to destabilize the world economy and execute a “satanic agenda” against the church.

The religious leader, however, did not provide concrete evidence to support his claims.

Okotie described the pandemic as a “bizarre project” by Gates in association with powerful elements in the multilateral institutions and supported by key leaders to achieve sinister objectives.

“People have asked me if we’re dealing with the number 666; if this is about the antichrist. Is this about you taking that number and the eternal damnation that is the consequence of that?” he said.

“No. We’re dealing with another number that is the precursor to the number 666.  There’s a man who is the protagonist of this whole process that we’re seeing today. His name is Bill Gates.

“The year 2020 was particularly chosen by Satan as the year when he would challenge the authority of the almighty God upon the face of the earth in preparation for the coming of the antichrist.

“How is he going to do it? First, he’s going to get a man who has the pattern and that man is Bill Gates. And then, there will be a conspiracy to bring in a pandemic, sickness.”

To back his claims, the clergyman quoted scriptural excerpts and explained how he thinks the billionaire is involved in Satan’s end-time assault on the church.

He also used biblical numerology to explain the names of three generations of the Gates family vis-à-vis their scriptural equivalents and their roles in the dispensational dealings of God with men.

Okotie posited that the COVID-19 vaccine, which is projected to be ready for large-scale trial in 2020, is a “red herring” meant to disguise the intentions that could cause death on a large scale.

“So he brings disease, sickness. They’ll create panic in the world. At this point, you’ve been asked to remain in your house because he must challenge God’s authority through fear,” Okotie continued.

“What Gates will do under the auspices of the UN is to make sure we no longer form the house of God. What Bill Gates is doing through his name is to stop people from congregating.

“We’re dealing with one of the most sinister conspiracies in human history. What we call an online church is untrue. To be a church, you have to be called out. Cyberchurches are totally unscriptural.”

There have been various conspiracy theories since the pandemic began. One of the most popular theories linked the coronavirus to 5G technology, which has found to be false.

The Bill and Melinda Gates Foundation has been working to eradicate the wild poliovirus in Nigeria for more than 10 years.

On June 18, the Africa Regional Certification Commission for polio eradication (ARCC) received documentation defending Nigeria’s polio-free status. The documents would then be reviewed by the World Health Organisation before Nigeria is certified polio-free.