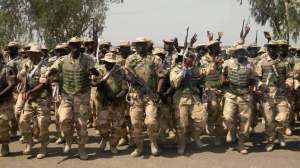 The Nigerian Army has debunked a report making the rounds that it is facing “morale crisis as 356 soldiers exit over loss of interest”.

The report on morale crisis which the Army described as “Mischievous Publication” had claimed; “Three hundred and fifty-six (356) soldiers are formally exiting the Nigerian Army citing “loss of interest,”

The investigative news media had also claimed; “The army is currently engaged in various combat operations as insecurity worsens across the country.


“Many of the soldiers are among the troops engaged in the decade-long war against Boko Haram in the Northeast, while others are from various other formations across the country.”

In the report the Army condemned as “FAKE NEWS”, the largest component of the Nigerian Armed Forces was claimed “has suspended approvals for voluntary retirement requests from soldiers.

According to the publication, “The order did not provide figures that show a spike in recent retirement requests compared with previous times, but it counselled against frivolous voluntary retirement applications that were being allowed to advance through the chain of command when they should have been rejected at the early stages.”

Meanwhile, the Nigerian Army had on Saturday stated that two armed bandits who are among criminal hoodlums terrorizing communities and Environs in the North Central zone of the country have been killed in Taraba state after gunfight with troops.

“Following actionable Human Intelligence on the infiltration of armed herdsmen on 10 July 2020 at Chambe community in Logo LGA of Benue State where 2 villagers were killed, troops of Operation Whirl Stroke from Tomatar and Gov/Afia swiftly deployed to the scene but the bandits have fled the area.

“Troops tracked the assailants to a makeshift camp at the outskirt of Arufu in neighbouring Taraba State.

“On sighting the troops, the armed bandits opened fire, troops overwhelmed the criminals with high-intensity fire, killing 2 of them while others fled in disarray with gunshots wounds.”