- Liverpool and Man City have already qualified for the next campaign, confirming the first two slots

- However, the battle for the last two top four slots will be contested between Chelsea, Man United and Leicester City

Man City's two-year Champions League ban have been overturned and the Citizens are eligible to compete in next season's competition.

Pep Guardiola's side were previously handed a two-season ban to compete in Europe after they were found guilty of transfer irregularities.

City are in good form in the current Champions League campaign as they hold a 2-1 first-leg advantage over Real Madrid in the round of 16 clash played at the Bernabeu.

However, the race for the Premier League top four has now been thrown wide open as Chelsea, Leicester City, Man United and Wolves with do battle for the last two slots.

Already crowned champions Liverpool and City have qualified for the elite competition irrespective of the results in their last three matches. 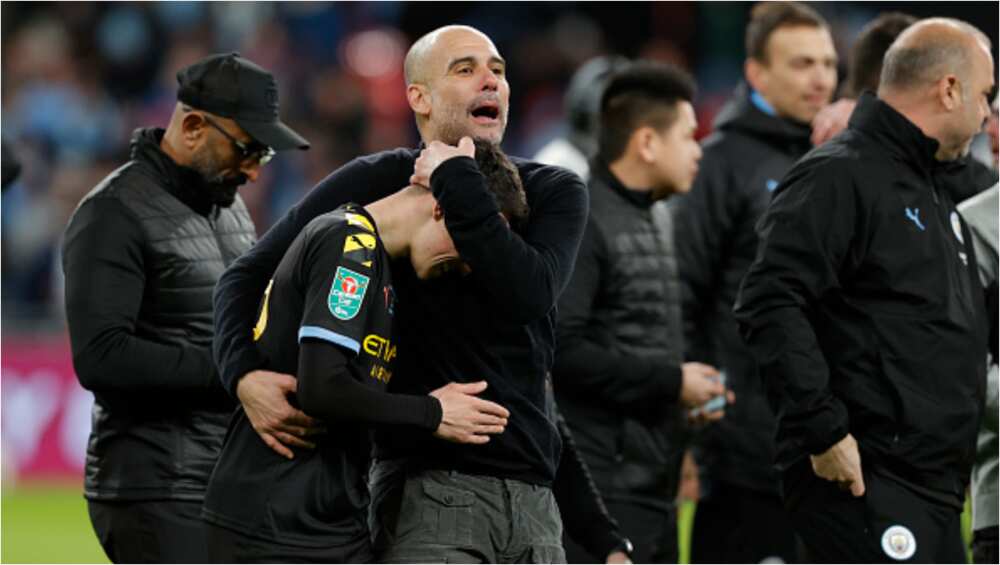 On the other hand, United will overtake Chelsea in third place if they beat Southampton at Old Trafford on Monday, July 13 in their week 35 game.

The Red Devils have tough games against Crystal Palace, West Ham and Leicester to play while the Blues will take on Norwich City, Liverpool and Wolves.

Brendan Rodgers' side are currently walking on a tight rope, recording just a win since the three-month break. But they stand an outside chance with games with Sheffield United, Tottenham and United.

Meanwhile, Legit.ng had earlier reported that Pep Guardiola's side recorded an impressive 5-0 victory over Brighton in a Premier League game with Raheem Sterling a hat-trick.

The Man City attacker's third goal was a fortunate strike after he fell to the ground between defender Adam Webster and goalkeeper Matt Ryan, as the ball hit him on his head into the back of the net.

The goal was credited to the England international to complete his hat-trick on the night at The American Express Community Stadium.