- Bobrisky said that he is the first transgender to become pregnant

Nigerian crossdresser Idris Okuneye popularly called Bobrisky has taken to his social media page to share a piece of good news with his fans and followers. The controversial influencer said that he is pregnant.

In a series of posts online, the male barbie said that he is 2-weeks gone. According to him, he can't hide the news anymore.

Congratulating himself and the father of his baby, Bobrisky said that he cannot wait to be a mummy. 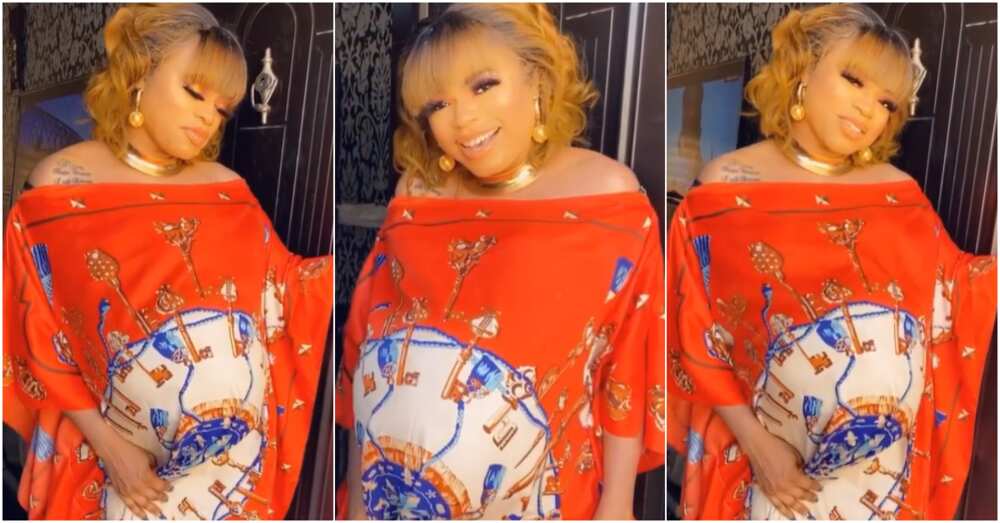 A few days ago, the crossdresser stated that he was getting fat and would have to inform his bae that they needed to start using protection. It seemed that the celebrity had been pregnant all along.

Bobrisky who seemed to be excited by his new status announced that he would be the first trans ever to get pregnant. With laughing emojis, the male barbie said that he cannot wait to welcome his baby.

Bobrisky went on to share an adorable video of himself dancing to singer Simi's Duduke song.

He was spotted in a beautiful long gown, blonde hair, and his face was made up. As he danced to the Duduke song, one could clearly spot his huge baby bump shooting out of his cloth.

In the caption that accompanied the video, he urged his followers not to laugh at him as he excitedly told bae that they were having a baby.

In other news, Legit.ng earlier reported that Bobrisky revealed his plans to spoil single mothers at his home in Lagos.

According to the controversial celebrity, he would be celebrating his followers who are single mothers. The male barbie said he would be inviting them to have lunch in his house.

Bobrisky also promised to give each of the women he invites the sum of N50k. He explained that he just wanted to make these single mothers happy.