Popular Links: Buhari Football EFCC Boko Haram Trending Nigerian Names Politics
Home | News | General | Physically-challenged call credit seller's hands shake as he is surprised with N134k (photo)
She was hungry and smelling on the streets - Man narrates how he found his lover, social media reacts
Drama as Manchester United major target gets kicked out of the nightclub for being drunk (video)

- Isaac is a call credit seller whose entire business capital was GHC400 (N26,828.42) which explains why he got so emotional after receiving 5 times that amount

A physically-challenged man named Isaac Deklu who resides in Tamale could not keep calm as he was pleasantly surprised with GHC 2,000 (N134,142.11) by a random 'stranger' he met.

The 'stranger' was Ibrahim Oppong Kwarteng, the founder of the famous Crime Check Foundation which is a respected charity organization in Ghana.

Isaac Deklu's heartwarming experience was sighted by Legit.ng on the official Facebook handle of the foundation.

It is reported that Isaac is a man who decided not to beg for alms like other people in his condition but rather chose to sell call credits for a living.

His dignity of labour eventually paid off

Business for him was, however, far from booming as he was running his entire sales on total working capital of GHC 400 (N26,828.42).

This explains why GHC 2,000 (N134,142.11) which is less than $400 meant so much to the hardworking Isaac Deklu, for which reason his hands started shaking as he was being handed the cash. 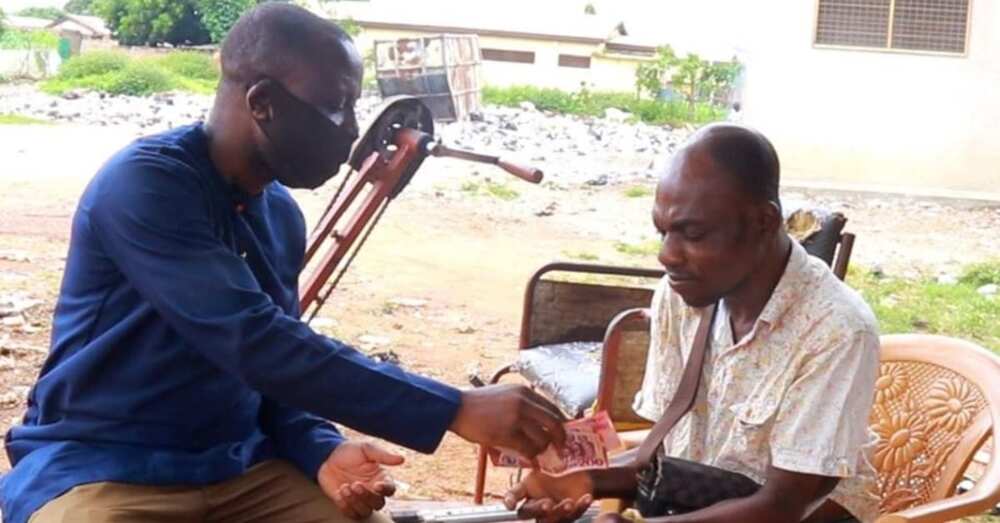 "In life, what you deem small is gold to someone. Let us be grateful to God all the time," the Crime Check TV said to conclude the heartwarming report.

Meanwhile, Legit.ng earlier reported that a Nigerian man with the name Tobi Marshal shared a very emotional story that would make anyone cry a bit.

He said when he was in high school and lost his dad, his friend was there for him while his mother struggled to pay his fees.

On days that he could not get food to school, Tobi’s friend always split his food money with him or bought him some meal so he did not go hungry.

The young Nigerian man said that at that time in his life, his friend’s parents were richer as his mom drove the latest car.

ln other news, a Nigerian woman, Irene Ubani, did humanity a great service as she gave a street beggar, Abolude Ayodeji, an opportunity to become better in life.

She said the boy, Deji, used to ask for alms at her bus stop alongside other teenagers like him. She was able to help him with the collaboration of the commissioner of education in Lagos state, Folashade Adefisayo.