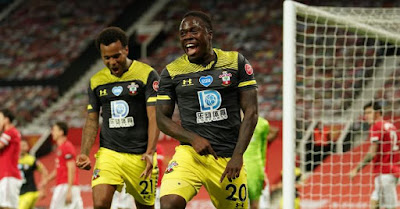 Southampton scored a 96th minute equaliser to claim a 2-2 draw against Manchester United and deny them the chance of moving in to the top four.

The Saints were full of energy in the opening stages, and a well executed high press saw Paul Pogba dispossessed on the edge of his own box.

Nathan Redmond capitalised by bursting into the United area and crossing to Stuart Armstrong, who controlled nicely before firing past David de Gea in the 12th minute.

But the home side took control after that, and found their equaliser in the 20th minute when Marcus Rashford tucked his shot into the bottom right corner.


A quickfire turnaround was completed just three minutes later, Anthony Martial cutting in from the left and beating Alex McCarthy with a powerful strike.

Pogba came close to recording United’s third before the break, but McCarthy pushed his goal-bound effort away.

Southampton responded well early in the second half, showing more of the intensity that helped them take the lead, but failed to create any clear cut opportunities.

In fact it was the Red Devils who came closest to scoring again, Rashford seeing a long-range effort hit the side netting before being denied once more by a brilliant Ryan Bertrand block.

Martial also could have had a double after breaking away, but sent his shot high and wide of the goal.

And United were made to pay for not killing the game off deep in to injury time, Michael Obafemi turning home from a corner in the 96th minute to earn his side a hard earned point.